Muslims and the Quran

Four categories according to their relationship with the book 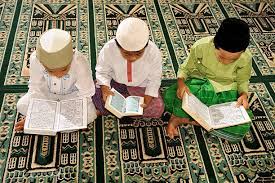 Muslims believe Quran to be the verbatim and uncorrupted speech of God. They also ‘revere’ it; especially in the subcontinent they are horrified if the Quran is found lying on the floor (even in a mosque) or where people may have their feet in its direction. Apart from this however, they differ widely in their attitude towards the book. Barring clerics and professional scholars, as far as Muslims of the subcontinent and their diaspora to other parts of the world are concerned, their relationship with the Quran categorizes them broadly into four groups.

The first group comprises those who, apart from ‘believing’ in it and revering it, have little interest or time for the Quran.

The second group consists of those who read it regularly without understanding a word of it. They know no Arabic and cannot be bothered to consult a translation. They do it for blessings that are supposed to come their way by the simple act of reading. Included in this group are those who resort to electronic alternative to blind reading in the form of audio recording on a mobile phone played back in their homes and shops. In addition to the blessings, an added advantage is the banishing of djinns and evil spirits, for which purpose Surah Baqarah, for some obscure reason, happens to be the chapter of choice. These people are also very enthusiastic about reciting the Quran for the benefit of departed souls in ceremonies following their deaths, where (again) it does not matter what one is reading so long as the Quran is ‘completed’ by the participants from cover to cover a certain number of times.

The third group consists of those who make it a point to know what they are reading by either developing a working knowledge of Quranic Arabic or consulting one or more of the many translations that are available in all languages. All this is done to rationalize their conduct by justifying the life choices they have already made or to win academic debates. These people grant that the Quran is guidance – for everybody else, not for themselves. When they read about virtuous folks in the Quran their minds conjure up images of themselves and their loved ones. Where the Quran mentions evil men and women, they visualize their in-laws and other unsavoury characters of the world. Like many ladies who, while watching a show, instantly start seeing themselves in the heroine of the play and their enemies in the villains, these people nod in agreement when upright men are mentioned and purse their lips in disapproval when the wicked are mentioned in the Quran. All the while they are thinking, alternately, of themselves and their real or imaginary rivals, with the latter ending up languishing in hellfire (another delicious thought). Far from benefitting from the Quran by mending their ways therefore, they get further hardened in their ways. The Quran explicitly talks about this attitude: it says that its verses increase the guidance of some and drive others farther into misguidance.

Here, it would be pertinent to recount an episode involving a lady who had started wearing her religion on her sleeve after a sudden transformation. A well-meaning elderly gentleman in a gathering asked her what had turned her into such a zealous advocate of Islam. She answered that Islam had enlightened her about regarding her rights. To which the curious gentleman asked: ‘Does Islam also have anything to say about your duties?’ ‘Yes, those too’, came the reluctant response. Of course, Islam lays down people’s rights as well – after all, duties and rights are two sides of the same coin, for one cannot exist without the other. But it is a problem when everybody is interested in his rights (relegating his duties to the ‘Yes, those too’ category). Unfortunately, this sort of self-obsessed cherry picking is very common when it comes to reading the Quran.

Morality first and foremost concerns oneself. It is about what one must do in any given situation. As far as most people are concerned however, morality is what everybody else must do in every situation.

The fourth group is made up of those who consider the Quran as guidance, first and foremost for themselves (not for their neighbours, their relatives, and their rivals). Allama Iqbal was famously advised by his father to read the Quran as if it was being revealed to him. The idea, of course, was to consider everything he read as a stimulus for introspection and self-improvement. For it is notoriously easy to fall into the trap many Muslims fall into; that of thinking that this verse condemns the Jews and that verse the Christians and the other one the universal nemesis: one’s mother-in-law. The right attitude manifests itself symbolically when one falls on one’s face immediately upon reading a verse regarding prostration, not because some jurist some hundreds of years ago declared it mandatory but because one is not just reading the book but is living it.

Morality first and foremost concerns oneself. It is about what one must do in any given situation. As far as most people are concerned however, morality is what everybody else must do in every situation. The distinction between self-righteous egoism and morality is lost on many, including unfortunately, many Muslims who apparently are very close to their book, revere it, quote it, recite it, and have even committed a sizeable part of it to memory.