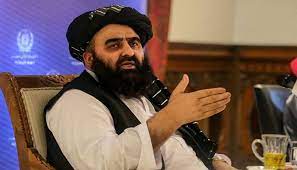 Disapproving Karzai’s statement, Foreign Minister Muttaqi said,”I do not see anything insulting about Imran Khan’s remarks that needs an official response. It was a positive conference and there are positive outcomes so we should not take it negatively,”.

Upon returning to Kabul from Islamabad where he had also addressed the OIC’s session on Afghanistan, Muttaqi told reporters he did not find anything “insulting” about Prime Minister Imran’s remarks.

“What’s of significance is that Imran Khan slammed former Afghan governments and I believe that officials from the past governments were compelled to show some reaction,” the foreign minister said in an apparent rebuke of Karzai.

He added that different views and opinions were shared at the meeting and that every person was responsible for what said.

“[And more] importantly, all participants at the conference spoke in favour of Afghanistan.”

It is pertinent to note that Muttaqi’s remarks were posted on the official Facebook page of Afghanistan’s state media too.

Earlier, Hamid Karzai responded to Prime Minister Imran Khan’s speech delivered at the OIC FMs meeting and accused him of making “an attempt to sow discord among Afghans, and an insult to the Afghan people”.

It is pertinent to note that Prime Minister Imran while addressing the 17th extraordinary session of the Organisation of Islamic Cooperation’s Council (OIC) of Foreign Ministers in Islamabad on Sunday stated that Pakistan faced the threat of the militant Islamic State (IS) group from Afghan soil.

Karzai in a statement on his Twitter, stated that the Pakistan government should “strictly refrain from propagating against Afghanistan and interfering in our internal affairs”.

“Pakistan should avoid speaking on behalf of Afghanistan [on] international forums. It should work towards creating positive and civilised relations between the two countries,” Karzai added.

Responding to the premier’s remarks on an IS threat originating from Afghanistan, the former president said the “allegation” that IS was active in the country and posed a threat to neighbouring Pakistan “is [a] clear propaganda as the reality has been the opposite”.

“The threat of ISIS has been directed from Pakistan against Afghanistan from the very onset,” he concluded.