US Negotiations with Taliban: Consequences and Side Effects 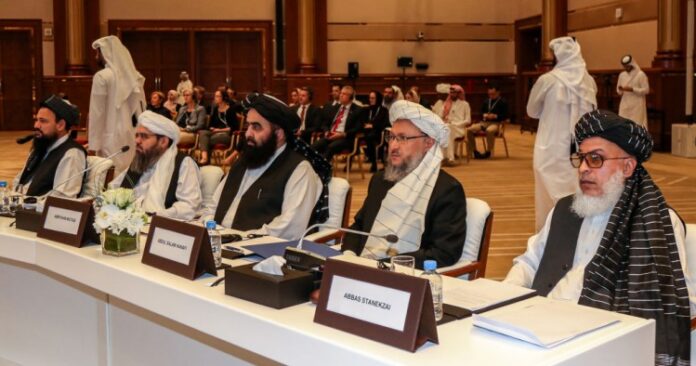 They ruled the country from 1996 to 2001, and their regime ended with the start of decisive American war against the terror groups of Afghanistan in search of Osama bin Laden, a culprit of the incident of 9/11. As a consequence, the USA ruled the country through the puppet governments formed in between the period and gave a neck-to-neck fight to Taliban terrors who emerged around 2005-2006 and took arms against the forces of the Afghan government, forces of America and its NATO partners.

Gradually, over the years of fighting intensely, the Taliban group began to adopt the way earlier used by the insurgents of Iraq war including suicide bombings and improvised explosive devices which gave the opposite camp frustration, destruction and casualties at large. In the fighting which started in 2009 took fresh surge on both sides and in next six or seven years several important Taliban leaders were killed in the war, leaving the Haqqani network to take the charge of Taliban from 2016 onwards, and its leader, Sirajuddin began to serve as the deputy leader of Taliban. The new group erected several obstructions in the smooth functioning of the Afghan Central government and as a result, the central authority of Afghanistan sought reconciliation with the Taliban, but this group considered the Government of Afghanistan as illegitimate and wished to negotiate with the foreign power, the USA. They started meeting in 2018.

Today, the word ‘Taliban’ is a source of horror for the region and the globe and firstcame to public notice in 1996 following the5r assumption of power in Afghanistan, in a situation of anarchy, uncertainty, and chaos left by the withdrawal of Soviet forces after a long war with the Mujahideen, a militia force, fully patronized and promoted by the USA.

At the regional level there are some countries like Saudi Arabia, the United Arab Emirates and Pakistan which have maintained diplomatic relations with both  the USA and the Taliban and they came forward to settle a negotiation between them to establish peace and security in the area. In the talks held initially, while US tried to reconcile the interests of Taliban as well as the Federal government of Afghanistan, Taliban was focused and concentrated first on negotiating peace terms with the US government, although, side by side as a result of discussions with the Federal government of Kabul, by July 2019, the general principles of negotiations with Taliban were ready which paved the way for final agreement between the two in February 2020.

Under the signed agreement, 14 months withdrawal deadline was fixed by the USA, and in exchange, Taliban assured Washington not to attack US forces and also prevent other militant groups like, al-Qaeda, the Islamic State in Iraq and the Levant (ISIL), also called Islamic State in Iraq and Syria (ISIS). As per other mentioned conditions, the US needed convincing the Federal government of Afghanistan over the release of some terrorists which took some more months to materialize and in further negotiations, although the USA reiterated its commitment to withdraw its forces but up to September 2021 and not May 2021. By the time the Taliban became confident about expelling the US and its allied forces and its withdrawal date approached near, under their next strategy the Taliban began capturing the Afghan territories one by one and till May-June it succeeded in controlling a large part of Afghan’s land, while in rest of provinces its campaign remained on, progressing day by day.

Taking advantage of the weaknesses of the Afghan government and army the Taliban took control over almost the whole of Afghanistan in mid-August and formed its government there to run the country like 1996. With their coming to power the Taliban faced the problem of its recognition domestically as well as globally because almost all countries of the world have refused to extend their recognition to the Taliban-dominated ruling party of Afghanistan, although, they all sought continued support to the people of the country and favoured all help on humanitarian grounds.

As an initial step, the transitional  government fully formed in September showed its inclination towards making some changes and opened boys schools, but at the same time also reinstituted brutal criminal punishments. Further, afterwards, the Taliban appeared not to make any change in its earlier attitude and continued its atrocities and attacks on all important issues of rights of women, women at work, rights of minorities. Recently, a senior UN High Commissioner for Refugees has expressed his anxiety over the rapid migration of Afghan people under Taliban in neighbouring countries and urged the Islamic Emirate as well as the international community to find a solution of this humanitarian crisis at the earliest as large-scale migration of people would also create problems in the neighbouring nations.

Now, the forces of the USA and its allied power have gone and the war with them is over, after their withdrawal the worst has arrived in every walk of life beginning with a number of atrocities on women and girls who used to be an easy prey of Taliban terrorists. In addition, the withdrawal brought a discontinuation and a stop of humanitarian foreign aid and put the economy of the country in a fragile stage, leaving millions of people facing hunger and starvation. In fact, the economy of the country, for long remained dependent on foreign aid that has now disappeared.

As a result of this, household goods are largely put on roadside for sale across Kabul and a significant number of people who were comfortable in leading their life are bound to remain hungry due to scarcity of various kinds. In the circumstances, those families are most affected whose bread-earners were women as they have been told not to work outside the house. Even the essential commodities of day-to-day life are not being provided to the people and salaries of employees are not paid due to scarcity of cash in Afghan banks. Several foreign funds including the US dollars have been frozen with the coming of the new Taliban rule, making the situation the worst in the history of Afghanistan.