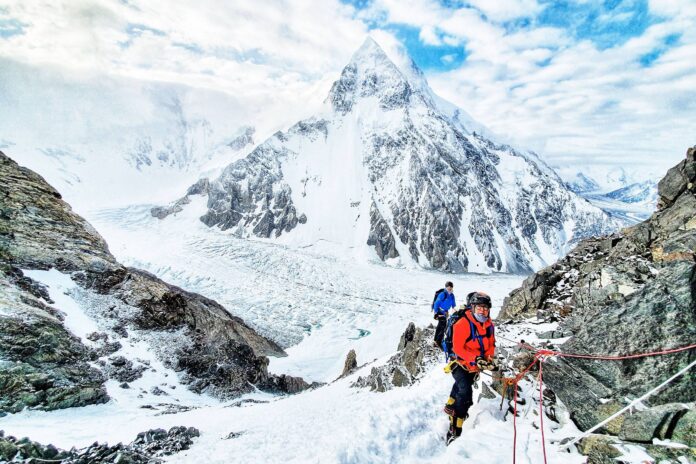 KARACHI: Pakistan’s scenic north has long been a rallying spot for mountaineers from across the globe because of its majestic peaks, although the adventure sport took a hit by the coronavirus pandemic.

International travel bans and other coronavirus restrictions had reduced the arrival of mountaineers, mainly from the US and Europe, to merely 10 percent over the past one and a half years, according to Alpine Club of Pakistan, the nation’s state-run mountaineering organisation.

The country, nonetheless, has seen a surge in mountaineering in recent seasons, following the pandemic’s decline and the reopening of international travel.

“The number of mountaineers and trekkers that had reduced to even less than 10% over the past one year, has now soared to 80% due to reopening of international travel,” Karrar Haidri, the Alpine Club’s secretary general, told Anadolu Agency on the eve of International Mountains Day, which falls on Saturday.

Haidri said 400 to 500 foreign mountaineers, and around 300 trekkers would visit the northern Gilgit-Baltistan region during a season — from May to September — before the coronavirus pandemic hit the globe.

“The latest figures show that almost 80 percent of the business has been restored,” he maintained.

Abdul Joshi, a local expedition organiser, agreed with Haidri that there are “clear signs of recovery” in mountaineering this year.

“In 2020, our company had zero business due to coronavirus restrictions. But this year, our business has soared by 60 percent, and we expect further increase in the coming season,” Joshi told Anadolu Agency.

Not only the foreigners, he went on to say, but the number of local climbers and trekkers has also increased in recent months.

Foreign mountaineers and trekkers are accompanied by 25-30 high-altitude and 100-200 low-altitude porters throughout the season.

Compared to the traditional mountaineering season, the participation of foreign climbers in the winter expeditions are much low due to highly extreme weather and the increased risk of avalanches.

During the current winter season, only two foreign expeditions are in Pakistan — from Japan and Taiwan — trying to scale K2, the world’s second-highest mountain in the Hunza valley.

In January, a team of Nepali mountaineers became the first to summit K2 in the winter.

The daunting K2, also known as the “savage mountain” due to its treacherous terrain, had never been scaled in the winter until the 10-member Nepali team performed a feat.

Some 300 mountaineers have made it to the top before, but all of them took up the challenge in either the summer or spring.

Even in relatively better weather conditions, 86 climbers have lost their lives trying to scale the mountain, which towers over Shigar in Gilgit-Baltistan, Kashmir, home to five peaks with altitudes of over 8,000 meters, including K2.

The northern Gilgit-Baltistan region, which borders China, is home to the five peaks of over 8,000-meter altitude.

According to the Alpine Club, no proper survey has been conducted to determine how many peaks with elevations of over 6,000 meters are located in Gilgit-Baltistan.

In addition to that, the region has over 5,000 large and small glaciers and more than 100 lakes, which jointly make up the world’s largest freshwater reservoir.

However, local climbers have long been forced to work as mere porters to carry loads with foreign climbers due to financial constraints and lack of training.

Nanga Parbat, or the “naked peak,” which is ranked the world’s ninth tallest mountain, is also known as “killer-mountain” because it has claimed the lives of most climbers.

With a summit of 7,821 metres, Masherbrum is known as the world’s hardest Alpine climb due to its dangerous avalanches and the moving ice that make climbing difficult.