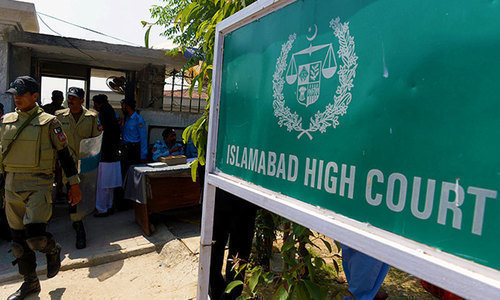 The Islamabad High Court (IHC) on Wednesday directed the additional attorney general of Pakistan to give arguments at the next hearing in case pertaining to encroachments in Margalla National Hills, according to Geo News.

According to the news outlet, during the today’s hearing, Additional Attorney General (AAG) Qasim Wadood informed the bench, headed by IHC Chief Justice Athar Minallah, that a committee comprising Special Assistant to Prime Minister on Climate Change Malik Amin, the Capital Development Authority (CDA) chairman and Islamabad Wildlife Management Board chairman has conducted a survey of the national park.

“The Margalla National Park encompasses thousands of acres of land. There are many categories of Margalla Hills,” Wadood said.

IHC CJ Minallah remarked that there are no categories of Margalla Hills but “just one national park, the ownership of which is held by the federal government”.

He inquired who had encroached the allotted land and what was the basis of the survey conducted by prime minister’s special assistant.

He also inquired about the Naval Golf Club built on the national park’s land. “Who is answerable if the [golf club] is an encroachment,” IHC CJ Minallah asked the additional AG.

Wadood said that whomever who has built the club is responsible for it.

The IHC directed the additional AG to give his arguments at the next hearing and adjourned the hearing till January 11.