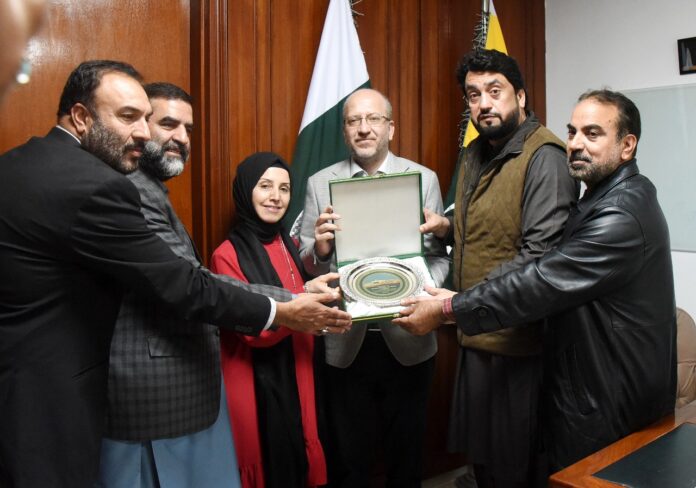 ISLAMABAD: Chairman of the Parliamentary Committee on Kashmir Shehryar Khan Afridi Monday said that the Kashmir story needs to be told to the world through innovative ways and Kashmir Committee would work with Turkish and Pakistani artistes to project the case of Kashmir.

Eminent Kashmiri leader Altaf Bhat and APHC representative Khadim Hussain were also present on the occasion. Shehryar Khan Afridi said that Prime Minister Imran Khan said that Kashmir is core of Pakistan’s foreign policy and all avenues would be explored to project the case of Kashmir.

Lauding the contribution of Turgay Evren for Kashmir cause, Shehryar Afridi said that the Turkish artist had become a voice of the unheard Kashmiri people.

“Lala Peshawari who got two ships of donations and contributions from Muslims of the subcontinent to Turkey. Many Muslims even left India to take part in the struggle for Ottomans,” he said. Shehryar Afridi said the marginalised and oppressed people of Kashmir need support from Turkey.

“Turkey has raised Kashmir issue at all global forums. Plebiscite is a fundamental right of the people of Jammu
and Kashmir and the world must give the Kashmiris their basic right,” he said.

Turgay said that he had already composed songs for oppressed Palestinians, Yemenis and African people. He said his songs on Kashmir had been translated in English, Arabic, Turkish and other languages.

“Its a matter of pride for me to visit the Kashmir Committee and the Parliament House which symbolise as voice of the people of Pakistan,” he added. On this occasion, Shehryar Afridi presented a memento to Turgay Evren.