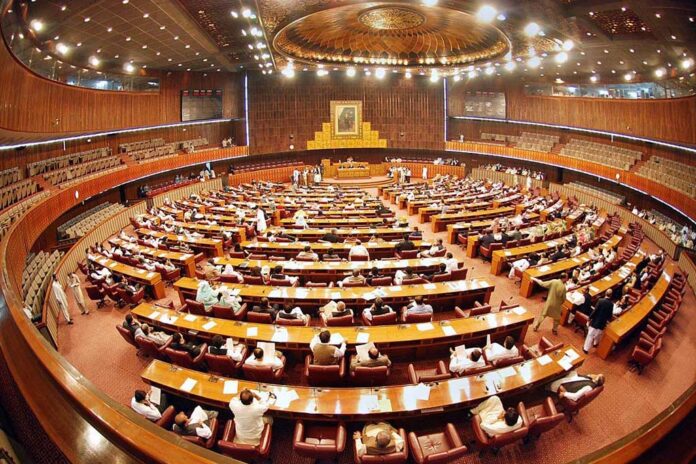 ISLAMABAD: The opposition in the National Assembly on Thursday announced its decision to boycott in protest to “persistently authoritarian” government approach the in-camera briefing of the National Security Committee (NSC) convened on December 6 to discuss, and inform the House, on the latest security situation in and outside Pakistan.

The meeting may be briefed by Lt-Gen Nadeem Anjum – the new chief of the Inter-Services Intelligence (ISI) agency who assumed office on November 21. The participants are likely to be updated on the situation in Afghanistan, developments in India-occupied Jammu and Kashmir (IIOJK) and much-criticised talks with the proscribed Tehrik-i-Taliban Pakistan (TTP) group.

Moreover, National Security Advisor Moeed Yusuf is also likely to brief the MPs on his recent interactions with officials of friendly countries.

Army Chief Gen Qamar Javed Bajwa is also expected to attend the moot. But Prime Minister Imran Khan, who skipped the previous meetings as well, is likely not to be present.

But the opposition, following a consultation meeting the previous day, issued a joint statement Thursday, saying it had been informed by the government about an in-camera briefing.

“Opposition parties had always shown a responsible and serious attitude on all issues of the constitution, law, national security, and public importance, which is why – despite the absence of the leader of the house and his complete detachment from important national and public issues – the opposition parties fully participated in these briefings,” the statement said.

However, due to the government’s attitude of “bulldozing” legislation in the Parliament, as well as its “persistently authoritarian and mediocre approach” to important constitutional, legal, national and security issues, the opposition has decided to boycott the briefing.

The opposition stated that it contains parties that have a “mature vision, extensive experience and seriousness on critical issues” related to the constitution, the country and the populace.

“In the past too, they [the opposition] have always played a historic role in protecting, guarding and promoting the rights and interests of the country and the people.

Even in the current contentious era, the opposition has given priority to the interests of Pakistan and the people. It has played its role in keeping all kinds of political sub-interests and affiliations at bay.”

“The opposition parties have earlier demonstrated a responsible behaviour over the constitution and public interest issues”, according to the statement.

“Despite the absence of the Leader of the House, the opposition has attended briefings, and sessions and leaders of the joint opposition and parliamentary leaders have given their proposals and preferred public interest in this disputed period.

“Regretfully, the government is using the parliament as a rubber stamp. The opposition deems that key national and public matter issues are not being presented in the parliament.”

It said the Parliament is being ignored and the government is running matters with in-camera briefings. “In fact, the government has practically boycotted the parliament,” according to the opposition.”

“In such conditions, an in-camera briefing will only initiate a new farce. The joint opposition deems the National Security Adviser only a showy character,” the opposition said.

The opposition lampooned that a “selected” prime minister did not attend meetings on important national issues because “not only was he ignorant of the democratic spirit of consultation”, but was also “unknowledgeable” about the importance of different views in decision making and the usefulness of opposing views.

They further claimed the prime minister was “deprived of the skill and ability” to use “collective wisdom” for the benefit of the country and the people.

The statement said that in such circumstances, an in-camera briefing will merely pave the way for a new government’s “spectacle”, which has nothing to do with the performance regarding serious and critical issues that Pakistan faces or the progress towards their solution.

Furthermore, the joint opposition held the national security adviser (NSA) was “deprived” of relevant information and authority on decision-making and behind-the-scenes facts, and was merely a showpiece.

They added that Moeed Yusuf’s objectives had nothing to do with real factors and future blueprints.

“In this context, the united opposition has decided to boycott the briefing,” the statement said.