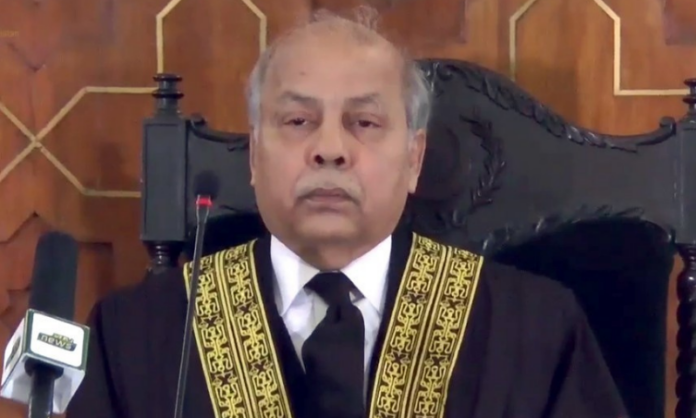 The Supreme Court of Pakistan (SCP) on Tuesday conducted hearing of a suo moto case pertaining to commercial use of military lands.

During the proceedings, Chief Justice of Pakistan (CJP) Gulzar Ahmed asked Defence Secretary Lt Gen (R) Mian Mohammad Hilal Hussain to return those lands to the government where activities regarding defence are not being carried out.

Cinemas, petrol pumps, housing societies, shopping malls and wedding halls have been constructed on the lands reserved for defence purposes, he remarked.

The apex court said that all cantonment boards’ lands are facing the similar issue.

The court said that a retired major had given the land of Global Marquees, a wedding venue near Gora Qabristan, on lease to a private party, and asked whether he had the authority to do so.

The CJP further asked about the action taken against the responsible people. Your army officials purchased the land and then sold it. How we can recover this area now, he asked from the secretary, according to a Dunya News report.

The CJP also rejected the report submitted by the defence secretary and said that the report claims buildings on the said land have been demolished, but these constructions are still standing there.

“This is an embarrassing situation for us and the army,” the CJP remarked.

To this, the defence secretary said he will visit the area in person and compile a fresh report along with pictures.

The secretary also said that the term ‘strategic defence’ is a broad term and the commercial activities on the military land are also part of strategic defence, adding that such activities promote welfare and boost morale of the army deployed on borders.

According to a news outlet, the top judge also said that the Canteen Stores Department (CSD) was turned into an commercial departmental store and buildings were erected overnight in the cantonment.

“Let us know what do you intend to do [to end commercialisation],” the chief justice asked.

The secretary responded that an inter-services committee has been formed to take notice of violations on the military land.

“All the land of cantonments must be restored to its original condition,” the top judge said, adding that the SC will also review all of the army rules and laws in light of the Constitution.

“The army is there for the country’s defence, not for doing business,” the CJP remarked.

The hearing was adjourned for four weeks.