Pakistan must use the law internationally 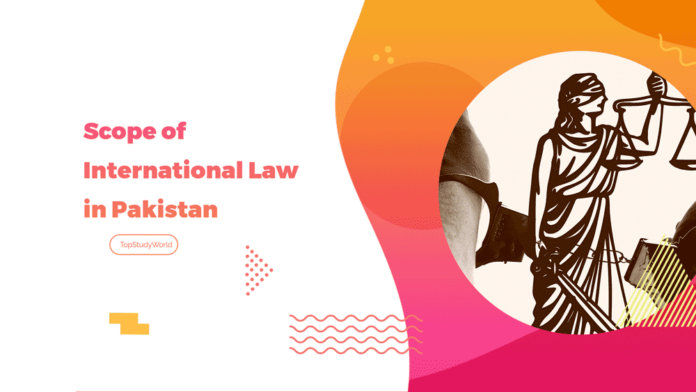 It is a universally recognized truth that “ law protects the vigilant, not the ignorant”. So the truth is that the proverb has inward meaning in its law language that you can live a life by protecting your right to live.  In this 21st century all the developed countries are fighting a war for their vested gains at the cost of the liberty of others, even though international law respects the right to live independently in one’s territory. International law values the sovereignty of an independent country and protects her right to defend if any foreign aggression illegally extends on her land.  Law is an accepted truth which every individual has to recognize if he believes that it shall treat all with justice and meet with fair means.

The tangible measures for Pakistan as the last stance for FO such as domestic, regional and global challenges are broad.  Pakistan can present its case more effectively if the battles in the courtroom are well fought. India’s stance shall be of no importance on world level if Pakistan presents her strong case politically, morally and logically fair in the ICJ

Realizing the need of the time, lawyer  Ahmer Bilal Soofi has  insisted that our government has to induct a strong lawfare as an instrument of foreign policy.  Apart from being  a former caretaker  federal law minister he is also President of the Research Society of International Law,   so he proposed that  today the Foreign Office has to set its goals very carefully to fight for and defend the rights of the country, and if deprived it has the option to  legally defend  her territory. The courts of international law appreciate the right and grant remedy for the loss to the one who is vigilant to his law of right but it does not  protect the indolent.  The saying is apt regarding this that ignorance of  law has no excuse because our rivals are conspiring and waging secret attacks on our independent lands so we are to counter-attack  by proposing absolute law that their attacks are illegal and baseless .  Law is all powerful  if used validly. We must believe that  all humans are competing to win by degrading their competitors by legal means or illegal ways.

The term lawfare means “the use of law as a weapon of  war” .It is  “a method of warfare where law is used as a means of realizing a military objective”. In this perspective the term  may be a more humane substitute for military conflict.  This is the exploitation of real, perceived, or even arranged incidents of law-of-war violations being employed as an unconventional means of “confronting” a superior military power. Lawfare can also be called a tool of strategic coercion.

Pakistan has to  prove her  strong determination by preparing logical and material  evidence against India in the International Court of  Justice that Indian atrocities in Kashmir are inhuman and  have caused violation of international law. India has failed to produce valid proofs that her action is legal and is for defense of the territory.

Pakistan needs to bring India to accountability through international law. In 1996, India proposed a draft document on CCIT at the UN. To date, that draft has remained a draft; on the one hand we want to fight terrorism; on the other, we can not define it. This is why terrorisst with a price on their head are celebrated, financed, and armed as liberation heroes by Pakistan.

The Indian agenda regarding Pakistan is not agreeable because it has no logic to prove in the court of international law that Pakistan sponsors terrorism in India and creates separatists in Kashmir. The truth is that Pakistan consolidates innocent Kashmiris against Indian brutality and raises a voice for the freedom of Kashmir on humanitarian grounds. Pakistan determines the freedom of expression and solidifies Kashmiri Muslims to stand united and march peacefully for their right. Our country condemns terrorist acts either internal or external and stands firm to eliminate safe havens of terrorism. It champion the cause of peace and harmonizing relations with neighboring countries.

Whereas India is engaged in espionage in Pakistani territory by sending Kulbhashan Jadhav, a naval officer caught conspiring in Baluchistan to encourage separatist groups against the state. The ICJ has proved the merit of the case that Pakistan is right in its decision to punish the culprit according to Pakistani law and repudiate the demand of India to free Jadhav from Pakistani prison.

Barrister Ahmer bilal soofi proposed that Pakistan foreign ministry must engage their young lawyers to study international law and its wide scope to counter the rivals in the international court of justice because all the super powerful countries are adopting lawfare move in their policy to have win-win agenda in comity of nation. The prolong disputed issues of  Pakistan and India shall be resolved on lawfare policy.  Indian lawfare move in international court is weak  regarding the  Mumbai attacks, Uri clash, Pathan kot assault and massacre at Samjota Express because the Indian FO has  failed to produce concrete evidence against  Pakistan in the international court. So as to prove the Indian as violator of their own territory for gaining cheap political as well as economic value they accuse Pakistan for terrorism and trying to isolate the country at global which is perceived as myth.

Pakistan has to create a battalion of young lawyers and legal experts working within the government since lawfare based on legal instruments is being used in the current world order.

The USA and Iran  are in a state of conflict for decades over the issue of  the latter’s nuclear programme. The USA sanctioned Iran and halted trade, devalued the currency which crippled the economy permanently. But Iran sought international favour so that they could initiate a civil nuclear programme. The international law court justified the programme of Iran and repudiated the USA lawfare move against Iran. The goods trade sanction against Iran has been removed at once and the USA failed with propaganda to eliminate Iran. The UNSC has reservations about the transnational issues between the countries. Iran countered the lawfare move  of the USA and the  International Law courts depreciated the unusual sanctions on Iran.

The most recent violation  of treaty among gulf countries , the Qatar  is open to us. The UAE ousted Qatar from Gulf state trade. The Qatar adopted the lawfare move in the ICJ where the proper documentation and legal file was produced  to respect agreement the article treaty and ICJ looked into the matter and favoured the right of Qatar against UAE. The court has issued the stayed orders and restored the gulf state agreement.

Like Qatar and Iran, the Kashmir issue is taking weightage at international level. The issue has been debated at every international forum. The cause of free Kashmir and durable peace is at the attention of the UNO since the Subcontinent’s partition. The resolutions have been passed in the favour  of Pakistan  that Kashmir shall be liberated  from the atrocities of India. But, India is negating the resolution of UNO and rejecting the rights of UNSC broadly. Kashmir unites and resists covert attacks. Pakistani lawfare move wins the right and reserves the option of defense at the ICJ.

Pakistan has been put on the FATF grey list due to accusation that Pakistani soil is financed for terror and has become a safe haven for terrorists.  The FATF members ask the concerns of the government to design solid laws to eradicate the chances of moneylaundering and financing the terrorist organizations.  He solidified determination of Pakistan nuclear capability that it shall not be confiscated by the terrorist. The lawfare move regarding this issue sanctified Pakistan that nuclear capability is only for defense.

The tangible measures for Pakistan as the last stance for FO such as domestic, regional and global challenges are broad.  Pakistan can present its case more effectively if the battles in the courtroom are well fought. India’s stance shall be of no importance on world level if Pakistan presents her strong case politically, morally and logically fair in the ICJ.

Pakistan must redefine her position and adopt a policy of lawfare in the Foreign Office so as to fight for its rights absolutely not only domestically but also at the ICJ.

Mujeeb Ali Samo
The writer can be reached at [email protected]