The SCO can be an effective regional organization 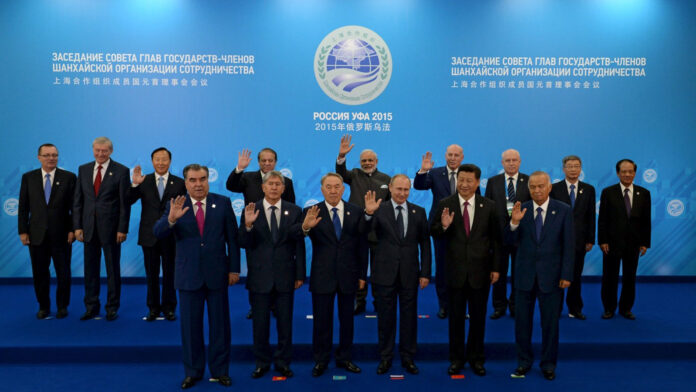 The Asian continent has seen many changes in the recent era. Liberation of many central Asian States from the clutches of the USSR made this region an opportunity for many to benefit from this openness. Central Asian states, knowing their potentia,l became active in developing new relations. War stricken decades caused losses of lives, values, assets and morale. All these elements after independence fr60 the Soviet Union became important to be restored. China as an immediate neighbour is already a stable international actor with a more rightful stake than anyone else from outside. China’s economic success could be assured if it was able to get a reasonable share from this region. It has a geographical, military and economical strategic advantage because of its location and rich resources. Afghanistan’s presence in the middle between Central and south Asia is a big challenge for China. It may be the biggest hurdle in connecting various trade and link routes. Other stakeholders have a strong presence in Afghanistan and their presence may produce an obstacle in China’s peaceful economic rise.

China and Russia are two major regional Asian powers to control and influence developments in the Asian region. American long-standing presence in the region cannot be denied as well. Recently there have been great developments in world power economic and strategic structures. A regional organization such as SCO is becoming greatly influential and creating an effective order in the region. At the same time declining US influence can also be witnessed when states are taking long-term mega-initiatives without US presence in contracts such as Pakistan and China in CPEC and China with other states in OBOR.

Chinese world economic influence is at a very rapid pace which has made it the leading economic leader, and long-run investments in Asian region seem a very strong foundation for regional hegemony while Russia also seems equally interested in regaining its glory. Both are key actors in conflict resolutions these days. Asian continent with almost half of the world’s population contains three major atomic powers, China, India and Pakistan, closely bordered with each other.

China, as an emerging regional and international actor, is playing a very active role in regional politics. Pakistan remained an important state for superpowers in the recent past because of her geographical location and strategic position. However, India’s role has always been suspicious in the maintenance of regional stability. Security and stability are the backbones of any progress.

Past events such as separation of Bangladesh, insurgencies of Tamil Tigers or of separatists of Balochistan, tyranny in Kashmir, terrorist support in Afghanistan and issues in Maldives and Nepal reflect the Indian negative role in the region. India seems to be an opportunist state which would put others at stake for her benefits. It is very important to analyse future Indian strategy for the region.  The Indian past is littered with support for adding tensions and acceleration of conflicts. There is also a need to discuss the Indian response to new Asia. Whether India will play a role in leading the region to heights of progress, stability, and development, or whether it will repeat its previous trends. This dimension will decide whether India would accept the growing influence of the SCO or it would react negatively. China needs to bring India to harmony for regional development.

Success of a forum like the SCO as a uniting unit is compulsory for a complex and diverse Asian region. China needs Russian and Indian support to work together for a sustainable prosperous future. China’s soft image and progressive mindset has the potential to bring these states closer to mutually benefit from thriving economic growth. It will create a regional supremacy as well as there are possibilities of an international regional order to be established in coming decades

Afghanistan has been a safe haven for militants involved in destabilizing regional countries. Even the Chinese Muslim province of Xinjiang remained an area affected  by various Tajik and Uzbek militant organizations. Pakistan has greatly helped China in dealing with militants and in joint security activities to safeguard the region.  The proposed TAPI, which will links Tajikistan Afghanistan Pakistan and India, can be a great economic project but there are large hurdles in its materialization. Iran and Pakistan are major powers to benefit and compete if central Asia needs access to warm waters and a trade route to Europe, the Middle East and Africa.

The Iran India joint project at Chabahar is one of the efforts to attract central Asian states, but at the same time IPI, the proposed Iran-Pakistan-India gas pipeline, is again a new development if materialized. Russia’s interests are more than any other and it can be witnessed by Russian involvement in Ukraine and other regional countries. Chechnya’s unrest is causing anti-Russian feelings in the Muslim Central Asian states, which can lessen Russian influence.

The Asian continent, with its multi socio-cultural and religious diversity, intensifies disputes because of clash of philosophies and interests of various communities.  It has also been a focus of international powers because of its rich resources which meet the need of international community.

The region has been under long stress because of wars and various armed conflicts. The bipolar world made Afghanistan a battlefield to let the superpowers contain each other. Afghanistan connects central and south Asian states and all neighbouring countries have a stake in this battle of superpowers. The whole region faced the pressure of this regional international conflict.

Now when China and Russia are seeking economic progress in the region, the security issue is to be tackled as well. There is a need for analysis of the security state and solutions being offered to this region along with developmental progress initiated for the long run to exist. It would also discuss the strengths and weaknesses of proposed security orders, especially consociation security order (CSO) mainly associated with Chinese plans. It is almost impossible to gain economic success without being fully secure. Security and energy are the backbones of development. Both are essential needs of thriving states. Before execution of any plan or strategy, a country has to arrange inputs for growth which are security and energy. Unfortunately, energy rich region is lacking security for many decades. In order to restore peace and improve security measures, an effective organization is a must need. UNO failures in maintaining peace and security devastated the situations in many region and conflicts were increased. Now the world is looking for a more effective organization which can serve as a mediator to resolve issues.

The SCO can fill this gap by actively playing its role in resolving conflicts and bringing nations in close cooperation. Possibilities are bright and declining US influence has given an opportunity to new international actors to avail this status which China best suits.

The Shanghai Cooperation Organization (SCO) has recently active participated in multiple dimensions to resolve regional conflicts of Asian states. Its sphere of influence is on rapid rise and this reflects a big change in the strategy of China and its partners in cooperation. It is indeed essential for China to seek help from an international organization to legitimize her actions with consent of stakeholders as in the case of the international hegemon, the USAQ, which got support from UNO throughout her military and economic expansionary ventures.

Economic corridors cannot be established and huge sums of investment cannot be made without prior feasibility and concrete plans. China’s silk route initiative, CPEC, OBOR and increasing role of SCO are all closely linked steps

SCO has filled the gap of ineffectiveness of UNO in resolving regional conflicts which might have been more influenced by US involvement for its greater interests. SCO seems to be playing the role of economic motivator and dispute mediator.

Past few years are the witness of the phenomena that Asia is the focus of economic activity with greater shifts in state policies. Enhanced membership and consent for actions of SCO would further legitimize China’s supremacy in the region, which is less confrontational and more cooperative. However, the biggest challenge in the smooth running of the SCO under the patronage of China is the satisfaction of other stakeholders who have deep-rooted interests in the region for more than half a century. India can play a decisive role in the triumph of projects by being part of it, as well as a failure by being antagonistic.

US resistance would also decide the fate of Asian region because the USA along with its allies possesses the potential of derailing any initiative. Minute to minute change is occurring in international relations these days. States are quickly shifting and rolling their policies with these changing scenarios. SCO should focus more on successful mediation in reducing tensions and negotiating around the table frequently by bringing conflicting states closer.

At the same time security measures are an essential part of successful economic projects. No development is possible without peace and a secure business environment expected by the international business community in order to invest.

Success of a forum like the SCO as a uniting unit is compulsory for a complex and diverse Asian region. China needs Russian and Indian support to work together for a sustainable prosperous future. China’s soft image and progressive mindset has the potential to bring these states closer to mutually benefit from thriving economic growth. It will create a regional supremacy as well as there are possibilities of an international regional order to be established in coming decades.