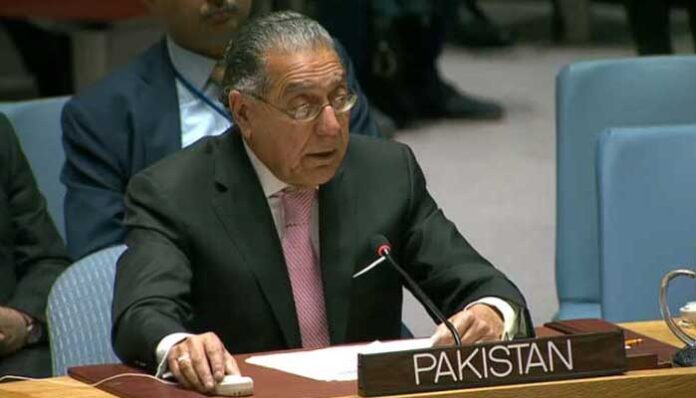 UNITED NATIONS: Pakistan reaffirmed its strong opposition to the drive by the Group of Four — India, Brazil, Germany and Japan — for permanent seats on the United Nations Security Council, saying there was no justification for creating “new centres of privilege” within the body.

“There are no states which can justifiably claim such unequal and elevated status, on the basis of any objective criteria,” Ambassador Munir Akram told the UN General Assembly during a debate on Security Council reforms.

“Any country seeking a more frequent presence on the Security Council should do so by subjecting itself to the democratic process of periodic election by the General Assembly,” he said, referring to Italy- and Pakistan-led Uniting for Consensus (UfC) group’s bid for expansion of the 15-member Council but only in the two-year non-permanent category.

Full-scale negotiations to reform the Security Council began in the General Assembly in February 2009 on five key areas — the categories of membership, the question of veto, regional representation, size of an enlarged Security Council, and working methods of the council and its relationship with the assembly.

Despite progress made during the last intergovernmental negotiations in April, the Pakistani envoy pointed out there were wide divergencies on key issues, with no clear division between permanent and non-permanent members of future Council membership and varying proposals on the veto and on equitable representation.

The negotiation process can only consider a text when key divergences are rectified, he cautioned, adding that any precipitant move to expedite the negotiations could derail the whole process.

“The UfC continues to believe that its proposal for a comprehensive reform of the Security Council offers the best basis for a compromise and consensus […] a reform for all,” the envoy said, referring to its plan for enlarging the Council’s membership to 26, with the addition of 11 new non-permanent members.

Citing the inability of permanent members to agree on decisive action, Ambassador Akram said, adding new permanent Members will only multiply the prospect of paralysis. Increasing the number of non-permanent members will enhance the equitable representation of the Council, he said.

By contrast, if six permanent members are added, the prospects of representation for the rest of the member states will be reduced, he said, adding a council composed of 11 permanent and 15 non-permanent seats would result in a 1-to-1 ratio which would be worse than the current makeup.

The UfC’s proposal to add only non-permanent Council Members is more democratic and in line with the organisation’s Charter, the envoy added.

Expressing support for Africa’s quest for greater council representation, he urged the member states to be sensitive to the concerns of the Arab Group, small island developing States, Latin American and Organisation of Islamic Cooperation (OIC) members, as well.

“We are committed to achieving this through consensus and consensus is the only way in which a reform of the Security Council can be realised,” Ambassador Akram said in conclusion.