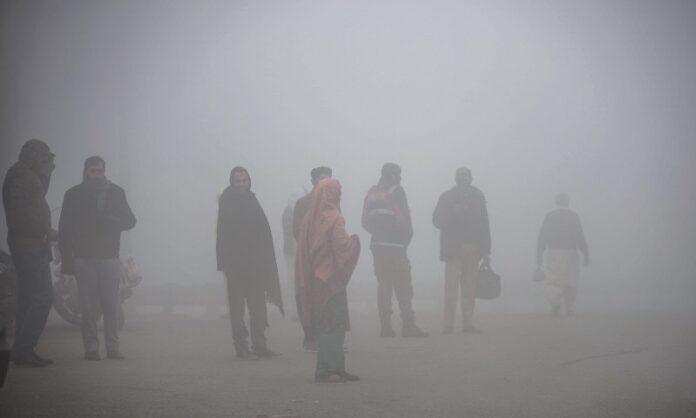 LAHORE: The people of Lahore woke up sniffing, coughing, and breathless Saturday morning. Along with panic, the air was filled with pollution choking the city into a tight vice of smog.

On Thursday, Lahore was declared the most polluted city globally, according to the Air Quality Index (AQI) due to high smog levels. Others parts of Punjab Province are also reporting massive surge in pollution related health issues. On Saturday, the AQI of the city was recorded a hazardous 346.

According to experts, smog is caused by air pollution that can not only cause accidents but is also harmful to health. Rain can only recede the smog.

The Met office has, unfortunately, predicted no rain in the city in the coming days and has cautioned people to take precautions and wear face masks.

In a bid to make this a tad bit better, the deputy commissioner of Lahore has formed an Anti-smog Task Force. It will comprise heads of the environmental department, Water and Sanitation Agency, Metropolitan Corporation Lahore, industries, and police.

Lahore DC Muhammad Usman said that every squad will inspect 12 and 60 industrial units on a daily and weekly basis, respectively.

“Two special teams have been formed to monitor cars emitting smoke in the city,” he revealed, adding that the government has decided to visit all brick kilns and factories in the city using boilers and surfaces.

On Friday, Justice Shahid Karim heard an environmental pollution case in the Lahore High Court. He said that no measures have been taken by the concerned authorities to curb smog and bureaucrats were just seating in their offices sending reports from there.

The court, consequently, appointed a judicial assistant to implement the commission report on smog, environmental pollution, and water pollution.

Earlier, the Judicial Water Environment Commission submitted a report in the Lahore High Court. It revealed that 250 brick kilns and 186 factories were sealed because their businesses were the primary contributors to air pollution. Moreover, over 5,201 vehicles were fined for emitting smoke.