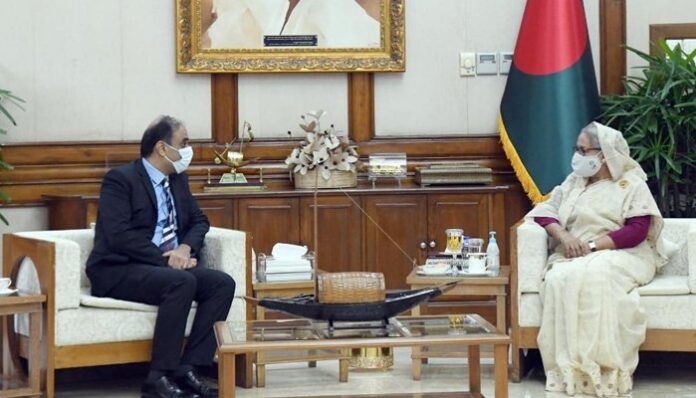 High Commissioner for Pakistan Imran Ahmed Siddiqui on Monday called on the Bangladesh Prime Minister Sheikh Hasina. Both the countries have agreed upon strengthening their bilateral relations.

It is the second time that the high commissioner’s has held a meeting with the Bangladeshi prime minister, where he conveyed Prime Minister Imran Khan’s message of goodwill and friendship.

In response to that, the Bangladeshi prime minister reciprocated her good wishes for the leadership and people of Pakistan.

“The meeting which lasted for 45 minutes was held in a very cordial [environment],” the official statement said.

The statement further revealed that the high commissioner thanked Hasina for her support in implementing his diplomatic mandate in Bangladesh.

The envoy also shared videos of his engagements in Pakistan during the summit, a photograph of Rahman’s portrait in Lahore Museum, as well as a Bangla version of a coffee table book “Alla’ma bil Qalam” containing calligraph-art rendered by Pakistani artists.

The high commissioner presented a photo album of former prime minister Sheikh Mujibur Rahman’s visit to Pakistan in 1974 to attend an Organisation of Islamic Cooperation summit, the statement added.

“Prime Minister Hasina thanked the high commissioner for the gifts,” the statement concluded.

February 4, 2023
MOSCOW: The president of the 2024 Paris Olympics organising committee stated that athletes should not "suffer" from decisions they do not control amid an...