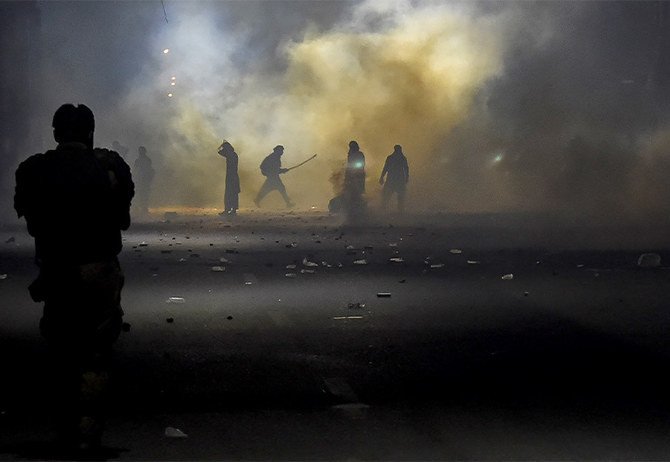 Three policemen were martyred and several others injured in clashes with workers of the banned Tehreek-i-Labbaik Pakistan (TLP) in Lahore on Friday, according to media reports.

According to a report, Lahore DIG (Operation) Spokesperson Mazhar Hussain identified two of the slain officials as Ayub and Khalid. The identity of the third official has not yet been ascertained, but a statement from the provincial chief minister stated that three policemen were martyred.

Hussain said that several others were also injured and taken to the hospital in critical condition. “Protesters also hurled petrol bombs on officials,” he said, adding that officials tried to prevent them from vandalising and damaging public property.

“The angry mob also used sticks and pelted stones,” he said, adding that officials were showing restraint despite the violence.

They had clashed with the police at several places in the city, he said. “They had assured us that they will remain peaceful but they turned violent,” he told Reuters.

A TLP media coordinator, Saddam Bukhari, said the police attacked the peaceful rally that was on its way to Islamabad.

In a separate statement, a spokesperson for the banned group said that workers had endured the “worst shelling in history” and were “attacked from all sides” near the Mao College Pul.

The spokesperson claimed that at least 500 workers had been seriously wounded while several had died.

Punjab Chief Minister Usman Buzdar offered condolences and prayed for the deceased officials. He assured their families that the provincial government stood with them in their time of grief.

The chief minister also directed officials to take strict action against those responsible for the incident. “Rule of law must be ensured at all costs,” he said, warning that no one would be allowed to take the law into their hands.

He also directed officials to ensure the best possible medical facilities for the injured policemen.

Meanwhile, the Punjab government formed a two-member committee to negotiate with the banned Tehreek-e-Labbiak Pakistan (TLP) ahead of the party’s long march to the federal capital.

Security in the twin cities has been placed on high alert with major highways, including the Murree Road, sealed with containers and barricades in an effort to deal with the TLP’s planned march from Lahore to Islamabad.

The proscribed party began their march to the federal capital after Friday prayers.

In Rawalpindi, link roads from Marir chowk to the Faizabad Interchange and Murree Road to the inner city have been closed for traffic, while roads from Shamsabad and Faizabad to Islamabad have been completely sealed by containers.

The expressway from Islamabad, however, was being kept open for traffic in the morning.

Heavy contingents of law enforcement personnel have been deployed at major intersections and at metro stations to deal with any untoward incidents.

As a result of road closures, citizens commuting to schools, colleges and workplaces faced severe difficulties.

According to a spokesperson for the Islamabad City Traffic Police (CTP), Park Road, Tramri chowk, and Lehtar Road could be used as an alternate route to reach Islamabad Highway. Srinagar Highway, while Ninth Avenue, and IJP Road can be used to reach Rawalpindi.

“Additional traffic police personnel have been deployed at High Court chowk, Kachehri, and Mall Road to maintain the flow of traffic. However, citizens should avoid unnecessary travel to Islamabad to avoid trouble,” the CTP spokesperson said.

The TLP demands of the government to fulfil its promise made to it a few months ago. The main demand of the party is the expulsion of the French ambassador to Pakistan. However, Interior Minister Sheikh Rashid said on Thursday the government could not expel the ambassador on TLP’s demand.