It also shows the way for the rest of South Asia 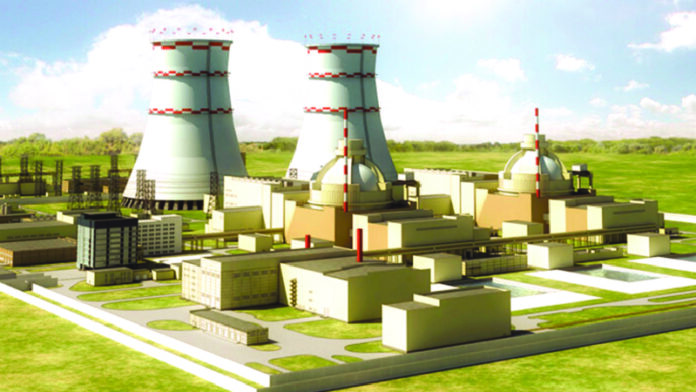 Work on the Rooppur nuclear power project on the banks of the Padma River at Rooppur in Pabna district in Bangladesh, the country’s most expensive power plant, is moving fast. This is one of the important projects of the 10 mega-projects of the present government. Bangladesh is going to be a model for the whole world, including South Asia, regarding the peaceful use of nuclear power.

The new door of Russia-Bangladesh bilateral cooperation was opened in 2013 through this agreement. At that time, the two countries signed a state export credit agreement with the nuclear-armed country to implement a nuclear project in Bangladesh. In light of this, the work on a nuclear power plant started at Rooppur in Pabna district in Bangladesh with the direct financial and technical cooperation of Russia.

The Bangladesh government is implementing its visionary 10 mega-projects now. There are garment factories in Bangladesh which are producing large quantities. On the other hand, the consumption of electricity is rising day by day. So, Bangladesh needs electricity. Bangladesh is trying its level best to increase production of electricity. In 2009, where the power generation was 3200 MW; now it has exceeded 20,000 MW. Two reactors with a capacity of 1200 MW are being set up at Rooppur. If production starts from the first nuclear power plant in Bangladesh, it will undoubtedly start another revolution of development in the country.

Even in the midst of the covid-19 pandemic, its work continues at a normal pace. The concerned people are hoping that the work will be completed on time. The first of the two units of the 1200-MW project will be launched in 2023 and the second in 2024. There is no alternative to energy and power security for the desired development and progress of any country. Bangladesh is expected to be upgraded to the status of a developed country by 2041. With this goal in mind, a comprehensive program of power generation has been taken. As economic activity grows, it is essential to ensure power supply as its driving force. In addition to the construction of large gas/oil-based power plants, several power plants and nuclear power plants are being constructed. The Prime Minister also mentioned the construction of another nuclear power plant. It will be in the south. The aim of these initiatives and projects is to meet the growing demand for electricity.

Hopefully, nuclear power will not only solve the problem of energy supply in Bangladesh, but also make an important contribution to the development of the overall quality of life of the people. The construction of the Rooppur nuclear power plant has initially cost more than 1113,929.1 million Bangladeshi Takas. Despite the epidemic, thousands of workers are working there day and night. In fact, this power plant will be considered as a model of clean energy in the country, which will provide affordable, reliable and quality electricity in the long run. This will make Bangladesh more prosperous. Russia-Bangladesh nuclear cooperation provides benefits for Bangladesh.

Bangladesh has entered the era of nuclear energy. In a video conference from Ganobhaban (BD Prime Minister’s official residence) on October 10, Prime Minister Sheikh Hasina Wazed inaugurated the installation of the first nuclear reactor pressure vessel at the Rooppur nuclear power plant under construction in Pabna district in Bangladesh. The installation of this reactor is considered to be the most important step in the process of commissioning a nuclear power plant.

After Rooppur in Pabna, Prime Minister Sheikh Hasina has sought Russia’s cooperation in building another nuclear power plant in the southern part of the country. She hoped that in the future, Russia’s state-owned nuclear agency, Rosatom, would cooperate with Bangladesh in this regard. The issue was discussed on October 11 morning at Ganobhaban when the DG of Rosatom, Alexei Likhachev, paid a courtesy call.

Now Bangladesh Seeks Russia’s cooperation in setting up another nuclear power plant. Ever since the original construction began in 2016, Prime Minister Sheikh Hasina has been talking about the state’s plan to build another nuclear power plant in the south of the country. On October 11, she also spoke in the same context at the installation ceremony of the first unit in Rooppur.

The implementation of the nuclear project in cooperation with Russia has come a long way. That is why Prime Minister Sheikh Hasina has sought the country’s help in building the second power plant in the country.

At the time, the ROSATOM chief said his country wanted more cooperation in Bangladesh’s power sector. Likhachev also briefed Sheikh Hasina on the construction and implementation deadline at Rooppur.

He said that mutual cooperation between Bangladesh and Russia has entered the nuclear field and by 2023 Bangladesh will become a nuclear power.

He said they would train Bangladeshis to run the RNPP and would continue their cooperation in Bangladesh’s power sector.

The people of Bangladesh are hoping that the power generation will start after the completion of the project as per schedule. The Rooppur project will have two units of VVR-technology reactors with a capacity of 1,200 MW. According to the schedule, Unit-1 is scheduled to be launched in 2023 and Unit-2 in 2024.

It is learned that the Rooppur nuclear power plant has utilized Russia’s best plans, many years of experience and scientific thinking. A senior official involved in the project said the unique combination of active and passive systems of the power unit would ensure the safe operation of the centre and ensure the planned level of power generation.

Hopefully, nuclear power will not only solve the problem of energy supply in Bangladesh, but also make an important contribution to the development of the overall quality of life of the people. The construction of the Rooppur nuclear power plant has initially cost more than 1113,929.1 million Bangladeshi Takas. Despite the epidemic, thousands of workers are working there day and night. In fact, this power plant will be considered as a model of clean energy in the country, which will provide affordable, reliable and quality electricity in the long run. This will make Bangladesh more prosperous. Russia-Bangladesh nuclear cooperation provides benefits for Bangladesh.