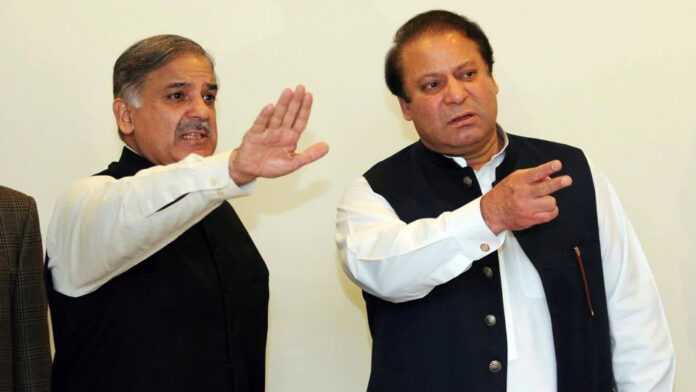 After the dreadful Zia Referendum of Decemeber 1984, ‘Institutional Disorder’ (ID) was deliberately created for purposes of control. Mian Nawaz Sharif of Gawalmandi as an ally of the establishment, played a key role together with the dictator in attacking civilian institutions. By inducting criminals into the Police, it was converted into a rogue force that moved from corruption to committing crimes and stealing elections.

Muhammad Khan Junejo, who managed to become Leader of the House and Prime Minster in a partyless Parliament tried to serve the nation. Compared to the Sharifs, he was an upright and decent politician who desired to make a difference. He played a key role in getting rid of the Martial Law and wanted to move towards strengthening the Parliament. It was the dismissal of his government that proved to be the beginning of the end for the third usurper. Unfortunately the Sharifs sided with the establishment as their agenda was different. In the 1988 elections, despite being the largest single party, the PPP was denied the Chief Ministership of Punjab. While Nawaz Sharif was given a free hand to run the province, Benazir Bhutto’s hands were tied at the centre.

From the pivotal position of CM of the largest province of the federation, Nawaz succeeded in first dislodging Benazir and then taking control of the country himself while leaving the province into the hands of his younger brother Shahbaz Sharif. The brothers together went after institutions that came in their way of loot and plunder. Even vital sectors of human development like education and health were not spared. Institutional memory plays an important role in its functioning.

Public records were destroyed which rendered them non-functional. Recruitments and promotions were carried out against merit. Those who stood in the way, were either side tracked or pushed out. Mian Muhammad Sharif, the founder of the ‘Sharif Dynasty’ believed in the power of money. According to his doctorine; “Every person has a price, pay and get the job done “. With his money-centric approach, combined with political power, he was able to build an empire. First it was the ‘Ittefaq Brothers’, after entering the corridors of power they were left behind to form the ‘Sharif Group’. The Sharif Medical City Complex and the Jatti Umra Estate are owned by this entity. Recently there has been a dispute of 127 Kanals of evacuee land which were allegedly acquired illegally. Stay has been granted against the recovery of this area by the Board of Revenue (BOR). The total area of the estate is around 175 Acres (1400 Kanals).

This deliberately created disorder has to be replaced with order, while those responsible for this mess have to be weeded out before the water crosses the bridge. A thoroughly corrupt and disorderly system cannot self-correct, it has to be corrected through leadership and iron will which has been missing thus far. Perhaps with another term in office the Kaptaan may succeed in steering the ship in the right direction

In the formative years of Pakistan, institution building was taken very seriously to ensure long term sustainability. The founding fathers worked very hard. There was limited experience of running railways. Tarrifs were the domain of the Hindus who kept it a secret. The few Muslim officers sought help from the Pathan watchmen to review the calculations at night. There were few engine drivers and mechanics, yet the trains were kept running. The Mughalpura workshop was the only technical facility in the country which provided the base for development of the engineering industry in the new land.   Banking was totally dominated by non-Muslims who left after Partition, leaving the sector unmanned.

Starting from ground zero, the republic was moving in the right direction. The first derailment took place in 1958 when civilian institutions came under attack but the founding generation weathered that storm. Hardly had we recovered, from the 1971 debacle and the resultant break-up of Pakistan, that the third usurper attacked. This time the attack was more lethal.

By the mid-1980s most founders had retired. A new breed of officers took control who were driven more by loyalty than rules. SROs (Statutory Regulatory Orders) were issued for individual gains. Conflicts of interest were blatantly ignored. Loans, plots, permits were doled out to party workers to buy their loyalty.

In 1998 before freezing the foreign currency accounts, several insiders encashed their dollars. Till today their names have not been revealed. Then the individuals who had their loans written off have never been exposed, clearly indicating institutional weakness. Even NAB (National Accountability Bureau) is investigating its internal corruption.

Education has been in total disarray for decades and has been turned into a very lucrative business. Both main political parties have established their own educational institutions and so have the armed forces, leaving the public sector universities in disarray. After the lawyers’ movement, the judiciary has not recovered. A country in which vital sectors of education, health and justice have been ignored, cannot develop.

Institutions have to be rebuilt all over again but the task is much more gigantic now as there are no role models left in the arena and the institutional memory has also been erased for personal gains. As a private citizen, I have to remind officers of the past laurels of their own departments when they were functional.

On seeing the deplorable state of the record of the Settlement Department (BOR), I decided to write about their legendary record keeper ‘Mumtaz Bola ‘who worked long hours to preserve the sanctity of his papers. Files, paperwork, nothing moves without wheels. The age-old ‘Diary System ‘has been abondoned. Letters are neither acknowledged nor answered. Even office hours are not kept. Without functional institutions, no records, no chain of command, lack of monitoring/accountability, absence of SOPs (Standard Operating Procedures), no delivery is possible.

This deliberately created disorder has to be replaced with order, while those responsible for this mess have to be weeded out before the water crosses the bridge. A thoroughly corrupt and disorderly system cannot self-correct, it has to be corrected through leadership and iron will which has been missing thus far. Perhaps with another term in office the Kaptaan may succeed in steering the ship in the right direction.