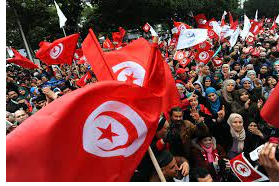 When Tunisian President Kais Saied dismissed the country’s prime minister and closed its Parliament, he said he was doing so to “restore social peace…and save the state.” He was addressing a series of crises that had been plaguing what many viewed as the one ‘Arab Spring’ success story. Tunisia had less than 7 percent of its public vaccinated against covid-19, the economy was in shambles, there was widespread government corruption, and major cities were being rocked by mass protests. A few weeks later, from mid-August through early September, Zogby Research Services (ZRS) conducted a survey of 1,551 Tunisian adults to examine their attitudes about satisfaction with their lives and optimism for the future, their most important priorities for their country and approval of the government’s handling of those concerns, the current crisis of governance, and the way forward.

What we found was that Tunisians are dissatisfied with their current situation (more say they are worse off now than they were five years ago) and pessimistic that their lives will get better in the next five years. Maybe the most telling expression of this deep dissatisfaction is the fact that 71 percent of Tunisians say that life was better before the 2010 revolution.

Tunisians are deeply dissatisfied with the failure of the Mechichi government, and its inability to address what overwhelming majorities say are the most pressing issues facing the country. While it appears that Tunisians are not of one mind on how to move forward toward securing their future, there appears to be strong consensus in the public’s desire to have both the election law and the Constitution amended and then to hold early elections.

Opinion is divided down the middle on President Kais Saied’s actions of dismissing the Prime Minister and shuttering Parliament, and whether there is concern for Tunisian democracy. When asked to recommend the way forward, an overwhelming majority of Tunisians say that they want the constitution and the election law amended and early elections. They do not want to restore the system as it was. And they lean toward a presidential system instead of a parliamentary system.

ZRS has been polling in Tunisia since 2011 and a look back at findings shows how opinion has changed during the past decade.

This decline in satisfaction was due to the fact that the Ennahda party that was leading the government at that time was seen as having been ineffective in addressing all of the major issues facing the country, with around two-thirds of respondents giving the government poor scores in dealing with the economy, protecting personal and civil rights, fighting extremism, and stopping corruption. As a result, only 28 percent said they had confidence in Ennahda. It is important to note that Tunisians have little confidence in all of the country’s political parties and the Parliament. Unlike the situation in Egypt, where the objection to the Muslim Brotherhood-led government of Mohamed Morsi was based on concern with its ideologically-driven agenda, Tunisian frustration with Ennahda in 2013 and now appears to be driven by its failure to govern competently and deliver on the promises of the revolution.

After several governments rose and fell over the next five years, by 2018 only 20 percent of Tunisians said the country was on the right track and only 21 percent said they were better off than they had been five years earlier. And only 25 percent had any confidence in the Parliament as an institution.

In 2019, in the midst of presidential and parliamentary elections, we witnessed an upward movement in Tunisians’ optimism. For the first time since 2011, more than 50 percent of Tunisians said they were optimistic about the future. But that optimism collapsed by 2021 owing largely to the government’s failure to address the pandemic, the economy, and corruption.

What comes through quite clearly from our past decade of polling in Tunisia is that precisely because there is a vibrant democratic culture in the country, public opinion can be quite volatile.

Tunisians are deeply dissatisfied with the failure of the Mechichi government, and its inability to address what overwhelming majorities say are the most pressing issues facing the country. While it appears that Tunisians are not of one mind on how to move forward toward securing their future, there appears to be strong consensus in the public’s desire to have both the election law and the Constitution amended and then to hold early elections.

While the public appears to have more confidence in the President than they do in the Speaker or the Prime Minister, President Saied should recognize that he doesn’t have much time to deliver both on structural change and meeting the basic unmet needs of a deeply divided and restless polity.