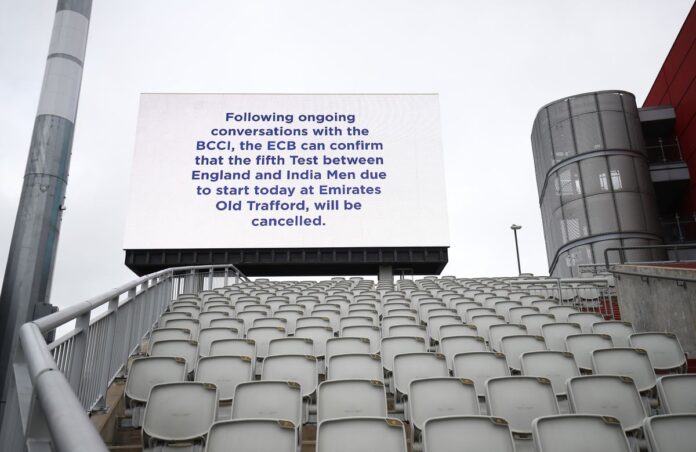 LONDON: India not fielding a team for the final test against England had nothing to do with the rescheduled Indian Premier League which left no room for the match to be postponed, England and Wales Cricket Board CEO Tom Harrison said late on Friday.

With India leading the series 2-1, the test at Old Trafford was cancelled barely two hours before its scheduled start on Friday after the tourists failed to field a side following a COVID-19 case in their camp.

Former England captain Michael Vaughan suggested that Indian players were “petrified” of testing positive ahead of the IPL, which resumes on Sept. 19 in the United Arab Emirates, but Harrison said he did not believe that was the case.

“India simply felt that they got to a point where they weren’t able to take to the field. That is understandable.

“As administrators, we need to be really clear that mental health has to be a priority for us when we’re thinking about the length of tours and the conditions under which people were expected to perform.”

India’s cricket board said they were working towards finding a window to reschedule the match.

Harrison said it was a “very sad day for test cricket internationally” and added that the International Cricket Council would adjudicate over whether the series is completed.

“We are looking forward to making sure that we can reschedule this match to some point in the near future,” he told a news conference.

“Effectively whether that fifth match is null and void or whether it is actually regarded as something else, a forfeiture […] I don’t know where that conversation goes, but it’s not one for today.”

Harrison also said the ECB could cope with the financial impact of a cancelled match having put mitigation strategies in place.

“Over the course of a season as complex as 2021 has been […] you’re not always writing down 100 percent of expectation against every single day of that season. I think we’ve got sensible risk analysis,” he added.

“This is a big blow but it’s one that we will get over quickly from a financial perspective… But the hit the fans have taken, that international test cricket has taken at losing the fifth match in an iconic test series like this, that takes longer.”