Taliban declare end to war as they overthrow Afghan government 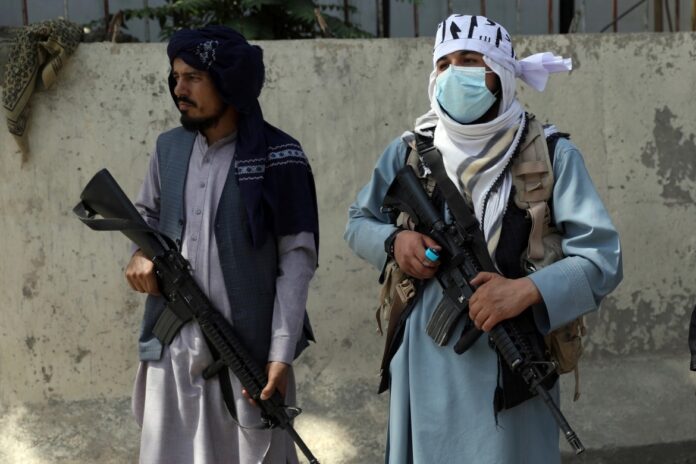 The Taliban declared the war in Afghanistan over after taking control of the presidential palace in Kabul while Western nations scrambled on Monday to evacuate their citizens amid chaos at the airport even as a tense calm gripped the capital.

President Ashraf Ghani fled the country on Sunday as the militants entered the capital virtually unopposed, saying he wanted to avoid bloodshed, while hundreds of Afghans desperate to leave flooded Kabul airport.

“Today is a great day for the Afghan people and the mujahideen. They have witnessed the fruits of their efforts and their sacrifices for 20 years,” Mohammad Naeem, the spokesman for the Taliban’s political office, told Al Jazeera TV.

“Thanks to God, the war is over in the country.”

“Now it’s time to test and prove, now we have to show that we can serve our nation and ensure security and comfort of life,” he said.

On Monday, most people hid in their homes as the Taliban deployed fighters at major intersections. There were scattered reports of looting and armed men knocking on doors and gates, and there was less traffic than usual on eerily quiet streets. Fighters could be seen searching vehicles at one of the city’s main squares.

The fighters also went around the city, collecting weapons from civilians “because people no longer need them for personal protection”, a Taliban official said.

“We understand people kept weapons for personal safety. They can now feel safe. We are not here to harm innocent civilians,” the official told Reuters.

City resident Saad Mohseni, director of the MOBY group media company, said on Twitter that Taliban soldiers had come to his company compound to enquire about the weapons kept by his security team.

It took the Taliban just over a week to seize control of the country after a lightning sweep that ended in Kabul as government forces, trained for years and equipped by the United States and others at a cost of trillions of dollars, melted away.

Al Jazeera broadcast footage of what it said were Taliban commanders in the presidential palace with dozens of armed fighters.

Naeem said the form of the new regime in Afghanistan would be made clear soon, adding the Taliban did not want to live in isolation and calling for peaceful international relations.

“We have reached what we were seeking, which is the freedom of our country and the independence of our people,” he said.

“We will not allow anyone to use our lands to target anyone, and we do not want to harm others.”

A Taliban leader told Reuters the insurgents were regrouping from different provinces, and would wait until foreign forces had left before creating a new governance structure.

The leader, who requested anonymity, said Taliban fighters had been “ordered to allow Afghans to resume daily activities and do nothing to scare civilians”.

“Normal life will continue in a much better way, that’s all I can say for now,” he told Reuters in a message.

“I’m in a complete state of shock,” said Sherzad Karim Stanekzai, who spent the night in his carpet shop to guard it. “I know there will be no foreigners, no international people who will now come to Kabul.”

For the tens of thousands who have sought refuge in Kabul in recent weeks, the overwhelming mood was one of apprehension and fear.

“I am worried there will be a lot of fighting here,” one doctor who arrived with his 35-strong family from Kunduz told AFP, asking not to be named. “I would rather return home, where I know it has stopped.”

The militants sought to project a more moderate face, promising to respect women’s rights and protect both foreigners and Afghans.

New Zealand Prime Minister Jacinda Ardern called for the Taliban to uphold human rights and said the world was watching: “It’s going to be all about the actions, not the words.”

Many Afghans fear the Taliban will return to past harsh practices in their imposition of Sharia law. During their 1996-2001 rule, women could not work and punishments such as stoning, whipping and hanging were administered.

UN Secretary General Antonio Guterres urged all parties to exercise the utmost restraint, and expressed particular concern about the future of women and girls.

The UN also said the Security Council would meet over Afghanistan on Monday.

In Washington, opponents of US President Joe Biden’s decision to end America’s longest war, launched after the Sept 11, 2001 attacks, said the chaos was caused by a failure of leadership.

Biden has faced rising domestic criticism after sticking to a plan, initiated by his Republican predecessor, Donald Trump, to end the US military mission by Aug 31.

“Terrorists and major competitors like China are watching the embarrassment of a superpower laid low,” McConnell said.

Naeem said the Taliban would adopt an international policy of two-way non-interference. “We do not think that foreign forces will repeat their failed experience.”

A US State Department spokesperson said early on Monday that all embassy personnel, including Ambassador Ross Wilson, had been transferred to Kabul airport, mostly by helicopter, to await evacuation and the American flag had been lowered and removed from the embassy compound.

Hundreds of Afghans invaded the airport’s runways in the dark, pulling luggage and jostling for a place on one of the last commercial flights to leave before US forces took over air traffic control on Sunday.

“This is our airport but we are seeing diplomats being evacuated while we wait in complete uncertainty,” said Rakhshanda Jilali, a human rights activist who was trying to get to Pakistan, told Reuters in a message from the airport.

US forces managing the airport fired into the air to stop Afghans surging onto the tarmac to try to board a military flight, a US official said.

Dozens of men tried to clamber up onto an overhead departure gangway to board a plane while hundreds of others milled about, a video posted on social media showed.

The Pentagon on Sunday authorised another 1,000 troops to help evacuate US citizens and Afghans who worked for them, expanding its security presence on the ground to almost 6,000 troops within the next 48 hours.

More than 60 western countries, including the United States, Britain, France and Japan, issued a joint statement saying all Afghans and international citizens who wanted to leave must be allowed to do so.

Western nations, including France, Germany and New Zealand said they were working to get citizens as well as some Afghan employees out.

Russia said it saw no need to evacuate its embassy for the time being while Turkey said its embassy would continue operations.

In a Facebook post, Ghani said he had left the country to avoid clashes with the Taliban that would endanger millions of Kabul residents. Some social media users branded Ghani, who did not disclose his location, a coward for leaving them in chaos.

Nato allies that had pulled out their forces ahead of the Biden administration’s intended Aug 31 withdrawal deadline were rushing troops back in as well this weekend, to airlift their citizens.

Some complained the US was failing to move fast enough to bring to safety Afghans at risk of reprisal from the Taliban for past work with the Americans and other Nato forces.

“This is murder by incompetence,” said US Air Force veteran Sam Lerman, struggling on Sunday from his home in Woodbridge, Virginia, to find a way out for an Afghan contractor who had guarded Americans and other Nato forces at Afghanistan’s Bagram air base for a decade.

Massouma Tajik, a 22-year-old data analyst, was among hundreds of Afghans waiting anxiously in the Kabul airport to board an evacuation flight.

“I see people crying, they are not sure whether their flight will happen or not. Neither am I,” she said by phone, with panic in her voice.

Even as CH-47 helicopters shuttled American diplomats to the airport, and facing criticism at home over the administration’s handling of the withdrawal, US Secretary of State Antony Blinken rejected comparisons to the 1975 fall of Saigon.

A joint statement from the US State and Defence departments pledged late on Sunday to fly thousands of Americans, local embassy staff and other “particularly vulnerable Afghan nationals” out of the country.

It gave no details, but high-profile Afghan women, journalists, and Afghans who’ve worked with Western governments and nonprofits are among those who fear Taliban targeting for alleged Western ways or ties.

The statement promised to speed up visa processing for Afghans who used to work with American troops and officials in particular. Underscoring the difficulty the US has had getting those Afghans out ahead of the Taliban, the statement could only assure “we will find” other countries to host some of those Afghans.

To many, however, the evacuations, and last-ditch rescue attempts by Americans and other foreigners trying to save Afghan allies, appeared far from orderly.

An Italian journalist, Francesca Mannocchi, posted a video of an Italian helicopter carrying her to the airport, an armed soldier standing guard at a window.

Mannochi described watching columns of smoke rising from Kabul as she flew. Some were from fires that workers at the US embassy and others were using to keep sensitive material from falling in Taliban hands.

Hundreds or more Afghans crowded in a part of the airport away from many of the evacuating Westerners. Some of them, including a man with a broken leg sitting on the ground, lined up for what was expected to be a last flight out by the country’s Ariana Airlines.

US officials reported gunfire near the airport on Sunday evening and urged civilians to stop coming. US military officials later announced closing the airport to commercial flights, shutting one of the last avenues of escape for ordinary Afghans.

US C-17 transport planes were due to bring thousands of fresh American troops to the airport, then fly out again with evacuating US embassy staffers.

The Pentagon intends to have enough aircraft to fly out as many as 5,000 civilians a day, both Americans and the Afghan translators and others who worked with the US during the war.

But tens of thousands of Afghans who have worked with US and other Nato forces are seeking to flee with family members. And it was by no means clear how long Kabul’s deteriorating security would allow any evacuations to continue.

ISLAMABAD: Mainly dry weather is likely to prevail over most parts of the country, while hot in central and southern parts, according to the...
Read more
World

DUBAI: With the cost of living surging, free hot bread distribution for the poor has been introduced in Dubai, a rich Gulf emirate where...
Read more
- Advertisment -