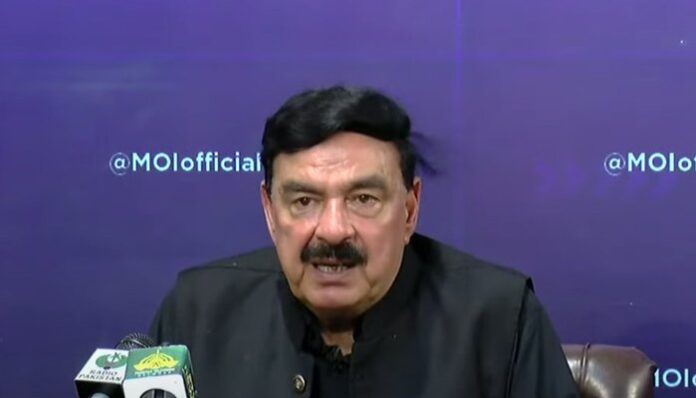 Minister for Interior Sheikh Rasheed said Monday former prime minister Nawaz Sharif was a “product of military’s nursery” and now he is speaking ill against the same army.

The minister, speaking at a press conference in Islamabad, asked the former prime minister and PML-N supremo to come back to Pakistan and face the corruption cases.

The interior minister claimed Nawaz could go to any lengths to propagate his agenda as he was against the army, establishment, and Prime Minister Imran Khan.

Sheikh Rashid, while offering a chartered flight for bringing Nawaz back, urged him to stop making speeches while sitting in the United Kingdom and better return to face the cases against him.

Moving on to the administrative matters, he said fencing along the Afghan border would be completed by August 14 while 46%-48% of fencing on the border with Iran had been completed.

There have been thousands of foreigners living in the country over the last many years without renewing their visas, he said, adding such people should either leave Pakistan before August 14 or get their visas renewed through online application.

No fine would be imposed on those who apply for the renewal of visa, he said.

The minister said the Federal Investigation Agency’s cyber-crime wing would also be developed on modern lines to improve its performance and efficiency.

A new policy of verification, renewal, and correction was being introduced in the National Database and Registration Authority (NADRA) for computerised national identity cards, he said.

Action has been taken against 39 NADRA officials in Karachi for their alleged involvement in the issuance of fake identity cards, the interior minister said, adding action would also be taken in other cities.

The minister said India and Israel have started a hybrid war against Pakistan and wanted to compromise NADRA’s data, adding that he had asked the institution’s new chairman to issue a revised policy within 14 days.

On elections in Azad Kashmir, the minister said as he had predicted earlier, PTI would form a government in the region without the support of any other political party.

PPP managed to get two to three more seats by spending a “huge amount of cash”, he said.

The interior minister said Opposition parties would cry foul even in the next general elections, as he hoped PTI would form government in Sindh in 2023.

Talking about the murder of a former Pakistani diplomat’s 27-year-old daughter Noor Mukadam, he said the name of Zahir Jaffer, the main suspect, would be placed on the Exit Control List (ECL).

His name has already been added to the Provincial National Identification List (PNIL), the interior minister said, confirming that the father of the suspect and his employees have been arrested.

The names of the suspects in the Mukadam case would be presented in the cabinet this week for inclusion in the ECL, he added.

He said he wanted Mukadam’s killer to be sentenced to death and those involved in such acts.