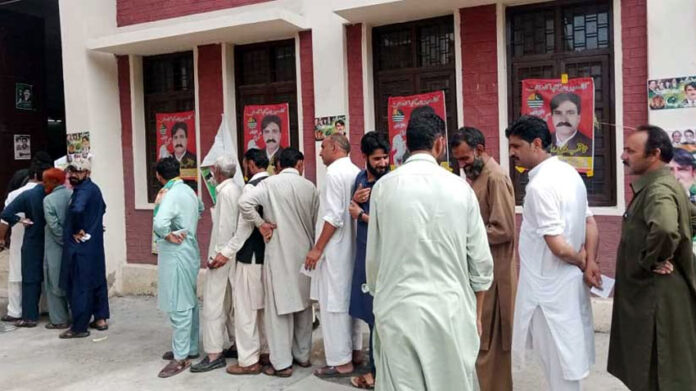 MUZAFFARABAD: Unofficial results show the ruling Pakistan Tehreek-e-Insaf in the lead after voting kicked off Sunday in Azad Jammu and Kashmir at 8:00 am to elect the state assembly. It went on until 5:00 pm without any break, Radio Pakistan reported.

More than 3.2 million people voted to elect the 53-member house to a five-year term.

An excess of 700 candidates from 32 political and religious parties contested 45 general seats.

Eight are reserved seats with five for women and three — one each for religious scholars, technocrats and overseas Kashmiris.

The members for those seats are nominated after elections.

Out of 45 general seats, 12 are reserved for Kashmiri refugees who migrated from the Indian-occupied part of Kashmir in 1947 and 1965 and are settled in various parts of Pakistan. Therefore, in the 10 districts of AJK, elections are taking place for 33 seats.

Only 20 women contested the elections for general seats from the 700 candidates.

Long queues of voters were seen at several polling stations in Muzzaferabad — the capital of Kashmir — Mirpur, Bagh, Rawlakot, Kotli and other districts.

As of the time of filing, unofficial results showed PTI’s Azhar Sadiq as the winner in Mirpur 1 with 14,233 votes, followed by PML-N’s Chaudary Masood Khalid, who had 7,609 votes.

Mirpur 2 had PPP candidate Qasim Majeed in the lead at 5,705 votes, with PTI’s candidate merely 800 votes behind.

Mirpur 3 and 4 were taken by Sultan Mehmood Chaudary and Chaudary Arshad Hussain of the PTI with 18,462 votes and 22,700 votes respectively, according to unofficial results.

The Bhimber 1 polls were won by PML-N candidate Waqar Ahmed Noor, who got 21,799 votes, while the runnerup from PPP, Chaudary Pervaiz Ashraf, secured only 15,583 votes.

Sardar Muhammad Naeem Khan got 19,133 votes in Kolti 2, securing the win for All Jammu and Kashmir Muslim Conference, with PPP’s Javaid Iqbal Badhanwi getting 17,221 votes.

PPP’s Chaudary Muhammad Yasin is leading Kolti 3 with 5,516 votes as of time of filing, while PTI’s Malik Muhammad Yousaf is in second place with 3,982 votes.

PPP won Poonch and Sudhnuti 2 and 3, with candidates, Saud Bin Sadiq and Sardar Muhammad Yaqoob Khan taking the lead in the elections, having gotten 8,671 and 2,411 votes, respectively.

Poonch and Sudhnuti 6 had not filed any results at the time of filing.

Neelum Valley 1 was won by Shah Ghulam Qadir of N-league, having gotten 10,218 votes. Neelum Valley 2 was being led by the PPP candidate.

PPP won both Muzaffarabad 1 and 2, according to unofficial results. However, PTI won Muzaffarabad 3 and 4 with candidate Khawaja Farooq Ahmed and Chaudary Muhammad Rashid having gotten 6,306 votes and 6,696 votes respectively. Muzaffarabad 5 had not filed any results yet.

Chaudary Maqbool Ahmed PTI candidate from Jammu 2 won the seat with 18,883 votes, while Chaudary Muhammad Ismail of the PML-N followed with 16,885 votes.

PTI was leading Jammu 4 with Muhammad Akmal Sargala having gotten 25,963 votes so far, but the PML-N candidate was close behind with 24,508 votes. The final count was not yet in.

Muhammad Akbar Chaudary of the PTI secured another seat for the party in Jammu 5 with 14,283 votes.

Jammu 6’s seat was secured by Raja Muhammad Siddique of the PML-N, who got 3,658, while the second spot went to Nazia Niaz of the PTI with 2,831 votes.

Amir Abdul Ghaffar got 2,165 votes for the PPP, securing the seat in Valley 1, while runner-up Muhammad Saleem Butt of the PTI only got 875 votes.

Valley 5 was won by Muhammad Ahmed Raza Qadri of the PML-N, with 2007 votes, while the PTI candidate was leading the polls in Valley 6 as of the time of filing.

As the unofficial results poured in PML-N spokesperson Marriyum Aurangzeb informed that party member Ataullah Tarar was arrested from Gujranwala’s Ali Pur Chatha. She demanded that Tarar and other party workers arrested to be released immediately.

“The arrest of Ataullah Tarar is proof of the Imran government’s great confusion,” she said.

Marriyum claimed that PML-N workers were arrested in Ali Pur Chatha “for putting up a resistance against vote thieves”.

The arrested party workers have been charged with “attacking police stations, tearing uniforms of police personnel and making threats”.

On the other hand, AJK Prime Minister and PML-N candidate Raja Farooq Haider claimed that the law enforcement agencies are “collaborating” with PTI candidates.

“I was told just now that in MZD 7 Dara Batangi and Banayia law enforcing agencies are collaborating with PTI candidate,” tweeted the AJK PM.

“A Public Works Department contractor, a ticket holder of PTI entered in polling station no 57 [and] thrashed my polling agent,” claimed the PML-N candidate. He added that he has conveyed the incident to the returning officer and warned that if the action was not stopped then he has “every right to take action”.

Hours after the polling ended, the AJK PM tweeted and asked why the results were not coming in.

Meanwhile, AJK Election Commission Secretary Muhammad Ghazanfar Khan said the General Elections 2021 were held in a free, fair and transparent manner, and rejected the rigging allegations from some quarters.

“No complaint has been received from any part of the state in this regard,” he said.

“No one without original National Computerised Identity Card had been allowed to cast vote,” he also said, to APP in an exclusive interview.

He said the EC looked into some complaints on its own and found no truth in them after complete verification. “Alhamdulillah!, the election process was generally peaceful.”

The secretary said that voters inside the polling stations were allowed to cast their votes even after ending the announced closing time at 5 pm.

He disagreed that polling was not allowed in some constituencies due to the law and order situation. “We have not received any report regarding the closing of polling at any polling station before the scheduled time.”

He expressed satisfaction over the law and order and appreciated the performance of the police and the Pakistan army for ensuring peaceful conduct of the elections.

Earlier, PML-N spokesperson Marriyum drew attention to the so-called “irregularities” being reported from various constituencies, wherein the complaints of polling agents were allegedly being prevented from entering polling stations and closure of polling was increasing.

She claimed that polling has been stalled for two hours at Girls Primary School Kangarhariwala, Union Council Komi Kot.

“Women voters are being treated insultingly,” she added.

Marriyum claimed that there are reports of votes being stamped inside the polling station with the help of staff.

No polling agent was allowed to enter LA-32 Chakar, LA-33 Goharabad except that of PTI, she further claimed.

“The tactics of 2018 and Daska elections are being repeated openly,” Marriyum stated.

On the other hand, Minister for Information Fawad Chaudhry had claimed an early victory for the ruling PTI in the Pindadan Khan and Khewra tehsils shortly after the voting ended.

He said on Twitter that voter participation in the AJK polls indicate that people took great interest in casting their vote and that they have expressed full confidence in the polling exercise.

“Insha’Allah, Imran Khan’s government in AJK will prove to be a source of strength for the people of occupied Kashmir,” he added.

Earlier, Science and Technology Minister Shibli Faraz claimed on Sunday that the “tried and tested” PML-N and PPP have failed and PTI will “carry the day”.

Following the division of Jammu and Kashmir between Pakistan and India in 1947, the AJK was governed under the presidential form of government. In 1975, then-Prime Minister Zulfikar Ali Bhutto introduced the parliamentary system of governance for the region.

This first government headed by Bhutto’s PPP was dismissed in 1977 due to the imposition of martial law by then-Army Chief Gen Ziaul Haq. There were no elections until 1985.

The Muslim-majority Jammu and Kashmir is administered by Pakistan and India in parts and claimed both in full. A small sliver of land is also held by China.

Since India revoked autonomy and divided the occupied part that it is holding into two centrally administered territories on August 5, 2019, elections in Azad Kashmir have attained considerable significance.

The army has been called in following clashes between rival political activists in several parts of Kashmir.

At least two people were killed and several injured in an armed clash between the activists of PTI and PPP at a polling station in Kotli district. The deceased are reported to be PTI workers.

Muhammad Shabbir, an official at Naarr police station, identified the victims as 40-year-old Zaheer Ahmed and 50-year-old Ramzan. He added that the clash erupted between PPP and PTI workers at about 9:15 am at the Mithi Jand polling station. In the ensuing gunfire, Ahmed was killed on the spot and Ramzan died on the way to the hospital.

Clashes between the rival parties were also reported from several polling stations in Muzaffarabad, Mirpur, Bagh, and Rawlakot districts, suspending the voting for hours.

Footage showed charged activists exchanging blows, kicks, and sticks against each other.

AJK Chief Election Commissioner Abdul Rasheed Salehria told reporters that army troops have been sent to the violence-hit neighbourhoods to restore the law and order.

In this regard, head of PPP’s central election cell, Taj Haider, has demanded the secretary election commission to hold repolling in polling stations 29 and 30 of LA-29 as the polling was stopped due to a scuffle.

In a separate letter, Haider complained that PTI workers had “captured” the Mandol Bazaar polling station in the LA-18 constituency and “ballot papers were being stamped by them.”

In a third such letter, Haider said PTI workers “with the support of the administration are stopping PPP voters from casting votes” at the polling station located in 84 Middle School in Khyber Pakhtunkhwa’s Katiala for the LA-6 constituency.