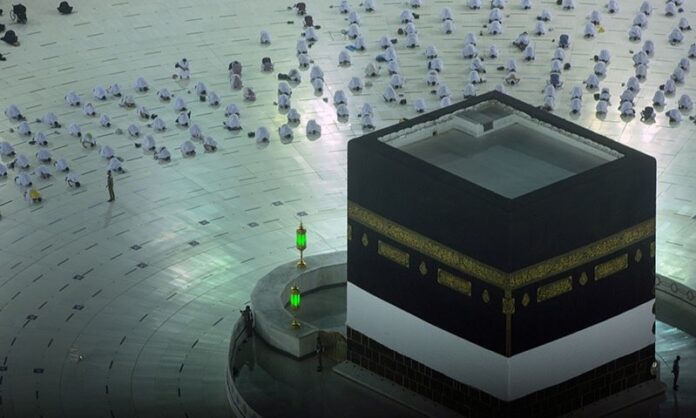 MAKKAH: Groups of pilgrims flocked to the Grand Mosque of Makkah on Sunday while adhering to precautionary measures against Covid-19 to perform the Islamic rituals of Hajj.

Pilgrims on this day perform Tawaf before preparing to head to Mina, situated east of Makkah, to spend the rest of the day resting and sleeping in preparation for their journey to Mount Arafat for prayer in what is considered the most important pillar of the pilgrimage process.

Since Saturday, groups of pilgrims have been performing the Tawaf, circling the Holy Kaaba.

“The number of women participating in the Hajj this year exceeds 40 percent,” he added.

Mina sits in a narrow valley surrounded by rocky mountains, and is transformed each year into a vast encampment for pilgrims.

Saudi Arabia has put in place a number of protocols to ensure safety for pilgrims, aside from continuous cleansing and sanitization operations throughout the holy mosque.

Thermal cameras have been placed at entrances of the Grand Mosque to monitor the temperature of those entering the area. Translation services in 10 different languages have also been put in place for those inside the Grand Mosque.

WASHINGTON: The war against Covid-19 has changed because of the highly contagious Delta variant, the US Centers for Disease Control said, proposing a clearer...
Read more
World

ISLAMABAD: Under immense pressure from the Board of Control of Cricket in India (BCCI), the England and Wales Cricket Board (ECB) has refused to...
Read more
HEADLINES

ISLAMABAD: The federal government announced on Friday new prices of petroleum products for a fortnight, which will be effective from August 1. Taking to Twitter,...
Read more
- Advertisment -