FM calls for renewed focus on geo-economics by Asian countries 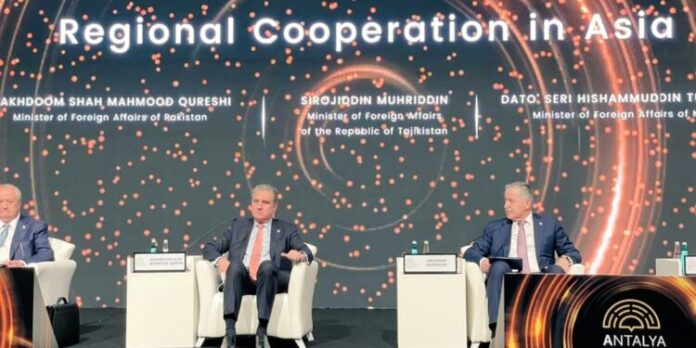 ISLAMABAD: Foreign Minister Shah Mahmood Qureshi on Saturday called for a renewed focus on geo-economics by the Asian countries and stressed upon the need for promotion of a rules-based global order.

He participated in a high-level panel discussion on ‘Regional Cooperation in Asia’ along with the foreign ministers of Kyrgyzstan, Malaysia, Tajikistan and Uzbekistan in Antalya Diplomacy Forum in Turkey.

Qureshi highlighted the challenges being faced by Asia in the form of unresolved disputes, tensions induced from within and outside, renewed arms race, containment policies, unilateralism, poverty, Covid-19 and climate change.

He is on an official visit to Turkey to participate in the Antalya Diplomacy Forum, where several global political leaders and diplomats have gathered for discussions on important global issues. The theme of the forum is ‘Innovative Diplomacy: New Era, New Approaches’ the Foreign Office spokesperson said in a press release.

Highlighting the potential of Asia in the 21st Century, the foreign minister drew attention to the possibilities of cooperation that existed on the continent.

He emphasised that connectivity and greater regional integration in the form of trade and investment would pave the way for a successful Asian century.

In this context, he noted that China-Pakistan Economic Corridor (CPEC), as a flagship project of Belt and Road Initiative, offered great opportunities for the countries of the region.

In his remarks, he also laid out five steps to promote greater regional cooperation in Asia, including focus on sustainable development, poverty alleviation and engagement with the international community and international financial institutions for debt relief for the developing countries in Asia in order to provide them with fiscal space to deal with the challenges.

During the discussion, the foreign ministers on the panel called for increased multilateralism to deal with the challenges faced by Asia and agreed on the need for a renewed focus on transit and connectivity projects in the region.

Meanwhile, on the sidelines of Antalya Diplomacy Forum, Qureshi met his Afghan counterpart Hanif Atmar, a statement from the Foreign Office (FO) said.

The two leaders exchanged views on issues of mutual interest, including the Afghan peace process, bilateral trade and economic relations, according to the statement.

He reiterated that there is no military solution to the conflict and expressed hope that Afghan leadership would realise the importance of the occasion and workout a negotiated political settlement. “Peace in Afghanistan will bring stability, economic prosperity and regional connectivity,” he added.

Earlier, Qureshi said that one “cannot pass the buck to Pakistan” for peace and stability in Afghanistan.

Talking to TRT World, he said that Pakistan has been engaged constructively for peace and stability in Afghanistan and would continue to do so.

“But this is a shared responsibility. You cannot pass the buck towards Pakistan. Islamabad is one regional player. There are others global players and there are other interests that are paramount in the region,” the foreign minister said.

“So, it has to be a holistic approach and Pakistan will be partner in peace,” he added.

Pakistan is keen to see both the Afghan peace process and withdrawal of troops advancing in tandem but in fact there is a disconnection between the two, said the foreign minister.

He said Pakistan has called for a responsible withdrawal besides desiring that the peace process go side by side.

“What I am seeing is that the withdrawal is taking place at a fairly rapid pace but the peace process is moving ahead at snail’s pace. That is a bit of a disconnection over there. And that is of concern to me,” the foreign minister said.

He said he is concerned over the rising level of violence in Afghanistan and which is not just linked to the Taliban, but other spoilers within Afghanistan, who are perhaps not keen to see peace and stability there.

“They have their own designs and motives […] This is a complicated situation. There are internal struggles going on within Afghanistan,” Qureshi said.

He said other conflicts like the Jammu and Kashmir dispute are also impeding economic progress and integration in the region.

Qureshi said that the world has increasingly been embroiled in great competition and confrontation, and people are being forced to take sides.

He said the Covid-19 pandemic is still lingering and would obviously leave behind its economic and financial implications, which also necessitated preparedness.

The foreign minister said Pakistan has been facilitating the peace process and engaging with all regional powers at every forum including the Doha process, Istanbul process, Heart of Asia and Moscow format.

With additional input from News Desk

LAHORE: Punjab Governor Chaudhry Mohammad Sarwar has said that if world does not pay attention towards Afghanistan, problems like terrorism and food security will...
Read more
NATIONAL

KARACHI: The government of Sindh has allowed the administration of Pfizer booster shot aimed at curtailing the spread of omicron, a new heavily mutated...
Read more
NATIONAL

CHARSADDA: An angry mob attacked and set on fire a police station in Charsadda district of Khyber Pakhtunkhwa on Sunday as police refused to...
Read more
NATIONAL

President Arif Alvi while addressing the 15th Summit of the Heads of States of the ECO in Turkmenistan has stated that peace in Afghanistan...
Read more
- Advertisment -