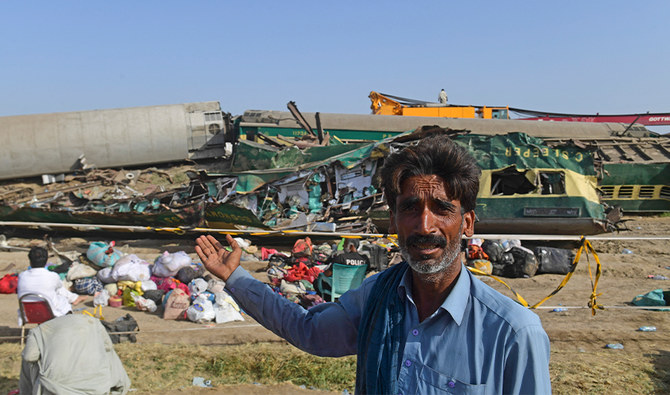 KARACHI: As an express train hurtled through farmland in the Ghotki district of Sindh and smashed into the carriages of another service that had derailed minutes earlier, a family of nearby villagers was jolted awake.

“The blast of the collision was so loud that we woke up in panic,” said Ali Nawaz, describing the start of a frantic bid to help passengers from the wreckage of the double disaster.

“When we came out of the house we saw the train had halted, as we got closer to the scene we heard people calling for help.”

At least 65 people were killed, according to officials, with more than 100 wounded.

With patchy mobile phone reception and a poor road network, it would be hours before emergency services could reach the site, some 25 kilometres from the nearest city of Daharki, deep in Sindh.

Nawaz’s family of around a dozen people lives just 500 meters from the tracks.

The men raced to identify the most seriously wounded passengers to take to hospital by car while those who appeared more stable were loaded onto tractor trailers.

The first passenger, a mother that Nawaz’s cousin drove to the hospital, died in the back seat.

Back at the farmhouse, the women raced to fill water containers for the injured in the sweltering summer night.

“They made a chain — the women would carry water to the midway point from where the men would carry it to the passengers,” 63-year-old Nawaz told AFP, cows and calves roaming the courtyard of his single-story brick home.

Hundreds of disorientated passengers emerged from the trains, slowly grasping the magnitude of the crash, which destroyed six carriages.

They joined villagers in searching for survivors, clambering over the crumpled carriages to reach those trapped inside.

Seat benches from the trains were turned into beds to carry people away, and bodies lined up on the ground and respectfully covered with scarves.

“I kept working day and night — cooking meals, bread and tea — and my husband and other male members of the family kept supplying them to the victims and rescue workers,” said Habiba Mai, one of Nawaz’s two wives.

As dawn broke, an injured passenger and her three children staggered to the house.

“I milked my cow to feed her little daughter,” said 40-year-old Mai. “The woman’s face was stained with dust so I washed it with water. She had no slippers on her feet so I gave her mine.”

Outside their home on Tuesday, army personnel were resting on traditional charpoy benches under neem trees.

An officer, who did not want to be named, pulled up to reward the family with Rs50,000 for aiding the rescue effort.

Mai stood next to her daughter, giving tea to the visitors still gathering outside the house in the evening, the walls blackened by smoke.

“My fingers have almost burnt sitting at the stove day and night,” she said, smiling. “We did the best we could.”