US pullout from Afghanistan half done, but questions remain 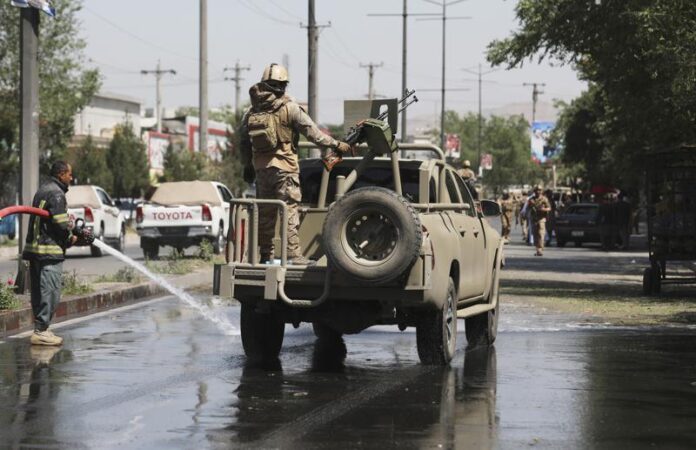 WASHINGTON: The US withdrawal from Afghanistan is more than half done, and US officials say that while it could be completed by July 4, the final exit of equipment and troops more likely will be later in the summer.

As early as this week, the top US commander for the Middle East, Gen Frank McKenzie, will give Defense Secretary Lloyd Austin a range of military options for securing the US embassy in Afghanistan and providing counterterrorism support from outside the country once the withdrawal is complete, officials said.

The number of American troops needed for the overall security missions inside Afghanistan will depend on a variety of requirements, and could range from roughly a couple hundred to a bit less than 1,000, officials said.

McKenzie’s deliberations are a reminder that much about US postwar support for Afghanistan remains uncertain, including how to protect Afghans who worked with the US government from reprisals and how to avoid an intelligence void that could hamper US early warning of extremist threats inside Afghanistan.

At stake is not just a political verdict on President Joe Biden’s judgment about the risk posed by renewed instability in Afghanistan, but also the legacy of an American war that was launched 20 years ago in response to the September 11 terrorist attacks and that imperceptibly morphed into what Biden calls “this forever war.”

McKenzie is expected to provide options on the amount of aerial surveillance and drones needed to keep an eye on any potential resurgence of al-Qaida, ISIS or other militant groups. Those options will involve US aircraft from ships at sea and air bases in the Gulf region, such as the Al Dhafra air base in the United Arab Emirates. And they could range from persistent US overwatch to a more minimal presence.

The officials, who spoke on condition of anonymity to discuss planning details, said there are no options yet for basing US troops or aircraft in nations neighbouring Afghanistan, because those possibilities require diplomatic negotiations.

Any agreements with countries such as Kyrgyzstan, Tajikistan or Uzbekistan would be difficult because there would be Russian opposition.

McKenzie told reporters Monday that the withdrawal from Afghanistan is on pace and “continuing very smoothly.” He said it was “about halfway finished,” but provided no details. Other officials, speaking on condition of anonymity, said the pullout was more than half completed but provided no specifics.

Officials acknowledge that the withdrawal so far has largely involved removing or otherwise disposing of the mountain of equipment, gadgetry, aircraft and other war materials that accumulated in Afghanistan over the years — not the departure of troops. Officials say the troops — who are needed to secure and execute the withdrawal — will be among the last to leave.

McKenzie will give Austin estimates on how many troops will be needed to secure the embassy and the airport. Turkish troops have provided security at part of the airport, and negotiations are underway to determine if that will continue. At least some American troops are likely to be needed — at least in the near term — to ensure that diplomats can come and go safely from the airport.

So far, the US military has none of the Taliban interference that American officials had feared at the start. But there are widespread concerns about whether financial and diplomatic support alone will prevent the Kabul government’s collapse after the international military support is gone.

In a statement released Tuesday, the Taliban said it would not attack Afghans who had worked with the US military, calling on them to return to their homes and not flee the country.

The pullout officially began on May 1, when the number of US troops was between 2,500 and 3,500. When Biden announced the decision in April, he gave the military until September 11 and promised there would be no “hasty rush to the exit” by the remaining US and coalition troops.

Gathering, cataloguing and shipping out tons of equipment and weaponry, and turning over military posts to the Afghan government, is an unusually big logistical challenge. Adding to the difficulty is the need to coordinate the effort with the Biden administration’s political, diplomatic and counterterrorism goals in a country whose government is fragile at best.

The Pentagon says it will do all it can to ensure that Afghanistan does not collapse as soon as its international military support is gone. But given the Taliban’s interest in returning to power, and the lack of progress toward a political settlement between the Taliban and the U.S-supported Kabul government, sceptics say the outlook appears dim.

“There is zero chance of a good outcome,” says David Sedney, a deeply experienced Afghan policy hand who believes Washington is squandering American credibility by leaving before the country is capable of defending itself.

The al-Qaida extremist group led by Osama bin Laden was the immediate target of the US invasion, and while bin Laden was killed 10 years ago and much of the group’s capacity has withered, it remains a worry. A June 1 United Nations Security Council report said al-Qaida remains linked to the Taliban.

“Large numbers of al-Qaida fighters and other foreign extremist elements aligned with the Taliban are located in various parts of Afghanistan,” it said in a review of the political and security situation between May 2020 and April 2021. “Al-Qaida continued to suffer attrition during the period under review, with a number of senior figures killed, often alongside Taliban associates while co-located with them.”

Sedney, who spent much of the past two decades either in Afghanistan or at the Pentagon working on Afghanistan policy, said in an interview that a major flaw in the US withdrawal plan is that it includes removing all US civilian contractors, whose work is central to the proper functioning of Afghan military aircraft, radars, battlefield intelligence systems and other equipment.

“The whole thing is chaotic,” he said.

John Sopko, the US special inspector general for Afghanistan reconstruction, whose organization monitors US efforts to rebuild and stabilize Afghanistan, said in March that the loss of contractor support is likely to be as devastating to Afghanistan as the departure of foreign troops.

KABUL: Afghanistan’s government is racing to ramp up supplies of oxygen as a deadly third surge of Covid-19 worsens, a senior health official told The...
Read more
World