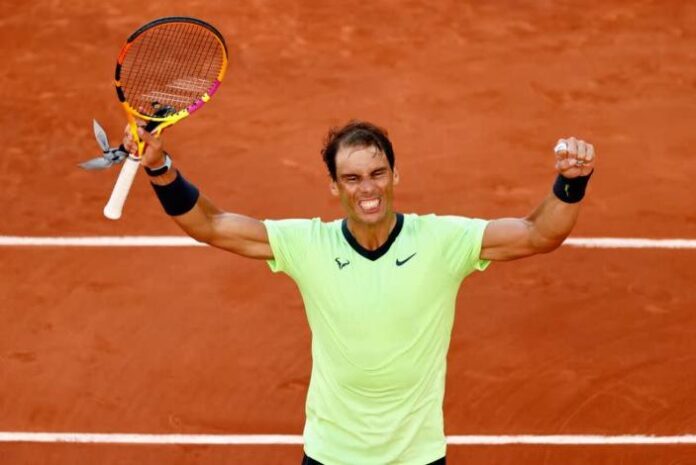 PARIS: For two sets and more than two hours at the French Open on Monday, Novak Djokovic found himself being outplayed by a 19-year-old opponent from Italy making his Grand Slam debut.

And yet, to hear Djokovic tell it afterward, he had the kid right where he wanted him. Which turned out to be true.

Rafael Nadal also faced an Italian who’s just 19 in the fourth round — and also took a bit of time to get going. Nadal’s trouble lasted all of eight games and less than 45 minutes Monday before he took control, ran his Roland Garros streak to 35 consecutive sets and joined Djokovic in reaching a record 15th quarter-final at the clay-court major tournament.

After dropping a pair of tiebreakers, Djokovic suddenly went from a big deficit to his best tennis. He grabbed 13 games in a row before Lorenzo Musetti stopped playing because of lower back pain and cramps while trailing 6-7 (7), 6-7 (2), 6-1, 6-0, 4-0.

“I like to play young guys in best-of-five, because I feel even if they are leading a set or two sets to love, as it was the case today, I still like my chances,” said the top-seeded Djokovic, who is 34, “because I feel like I’m physically fit and I know how to wear my opponent down.”

Nadal, who turned 35 last week, trailed 5-3 early on against the 18th-seeded Jannik Sinner, who served for the first set at 5-4.

“I was playing a very good player with a big future,” Nadal said.

Musetti, a talented Italian so good at the outset with his one-handed backhand and tremendous touch, is hardly used to this best-of-five-set format at the majors and he took a medical timeout after the fourth.

“It didn’t make sense to keep playing. I couldn’t win any points or stay in the rallies. It was hard for me to move,” Musetti said. “I was at my limit.”

Djokovic wound up 9 for 9 on his break-point chances and with a 53-30 edge in winners.

How shocking was it just to see Musetti take a pair of sets against Djokovic, who is seeking his second French Open championship and 19th Grand Slam trophy overall?

“Even for me,” Musetti acknowledged afterward, “it was a little surprising.”

The top-seeded Djokovic never has been beaten at Roland Garros by someone ranked as low as the No. 76 Musetti. Djokovic’s only previous loss against a teen at the French Open came back in 2006 against a guy named Nadal. And Djokovic entered the day 14-0 in the fourth round at the place.

Plus, consider Djokovic’s recent form: He was 10-0 in Grand Slam matches in 2021 and hadn’t ceded more than four games in any set in Paris — let alone an entire set — while dropping a total of just 23 games until Monday.

Eventually, Djokovic earned his fifth career comeback from two sets down by limiting his mistakes and making Musetti look like what he is: Someone with plenty of promise but not much experience.

Djokovic’s 49th major quarterfinal will come against another Italian, No. 9 seed Matteo Berrettini, who advanced without needing to swing his racket once Monday.

That’s because the man Berrettini was supposed to face, 20-time Grand Slam champion Roger Federer, withdrew Sunday in order to let his surgically repaired right knee and the rest of his 39-year-old body recover with an eye to Wimbledon, which starts June 28.

Just as Nadal vs Sinner was a rematch from last year in Paris — Sinner also served for the first set in that one before losing in three — Nadal will play No. 10 seed Diego Schwartzman next in a reprise of a 2020 semifinal.

In women’s play, 17-year-old American Coco Gauff became the youngest player since 2006 to reach the women’s quarterfinals at any Grand Slam tournament by overwhelming No. 25 seed Ons Jabeur 6-3, 6-1 in under an hour.

Gauff now meets Barbora Krejcikova, who reached her first major quarterfinal with a 6-2, 6-0 victory over Sloane Stephens, the 2017 US Open champion and 2018 French Open runner-up.

Gauff, Krejcikova and Sakkari are three of the six women making their Grand Slam quarterfinal debuts.

On an afternoon that began with the sun shining, before clouds intervened, Djokovic’s two-handed backhand, his best shot, was off. Way off.

By the second game of the third set, he already had accumulated two dozen unforced errors off that wing alone.

And while Djokovic is normally adept at tiebreakers — he made no errors at all in the three tiebreakers of his 2019 Wimbledon final win against Federer — Musetti was on-target and so good in that high-pressure, high-stakes environment. Musetti is now 10-0 in tour-level tiebreakers for his nascent career.

After that, though, Djokovic took over.

“I never thought I had it won. Absolutely not,” Musetti said. “Against a champion like Djokovic, you truly only have a victory when he shakes your hand at the end.”