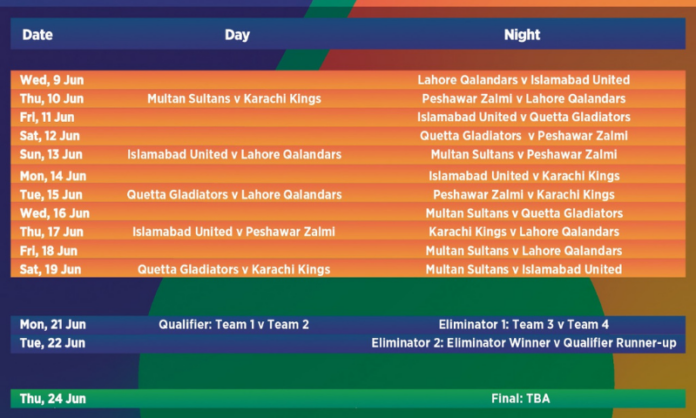 LAHORE: The Pakistan Cricket Board on Thursday announced the schedule of the remaining Pakistan Super League (PSL) 6 matches.

According to the schedule, the matches will be played in Abu Dhabi from June 9 to 24 as the players of the national team will departure for UK from the UAE capital on June 25.

The cricketing body said there will be six double-headers, five of them would be held during the preliminary round and the sixth would be played on June 21, when a qualifier and eliminator 1 matches would be played.

On June 9, fourth-placed Lahore Qalandars would meet third-placed Islamabad United in what will be the 15th match of the tournament.

The PCB statement said, “The delayed start due to logistical and operational challenges that were beyond the PCB’s control will allow the sides sufficient time to train, practice and gear up for the biggest prize in Pakistan’s cricket calendar.

“Players and player support personnel, who have completed the mandatory seven-day room isolation and returned three negative tests, are allowed to integrate with their sides and participate in training sessions.”

PCB Chief Executive Wasim Khan said, “Since its beginning in 2016, the PSL has embraced and overcome numerous challenges only to emerge as a stronger and competitive league. The enhancement and credibility of the PSL brand remains critical to the PCB. I am pleased that we continued to take decisive actions in the face of ongoing pressures and major challenges outside of our control. Everyone has worked tirelessly to find solutions and way forward. I am delighted that we are now in a positon to announce the complete schedule.”

“There was a consensus between the PCB and the franchises that it was imperative to complete the remaining matches in 2021 so that we have a clean 2022 for HBL PSL 7. Now, after overcoming all obstacles through due diligence and careful planning, I believe we have collectively achieved the desired objective that was set in March following the postponement.”

The event was earlier suspended in March after seven people participating in the tournament had tested positive for Covid-19.