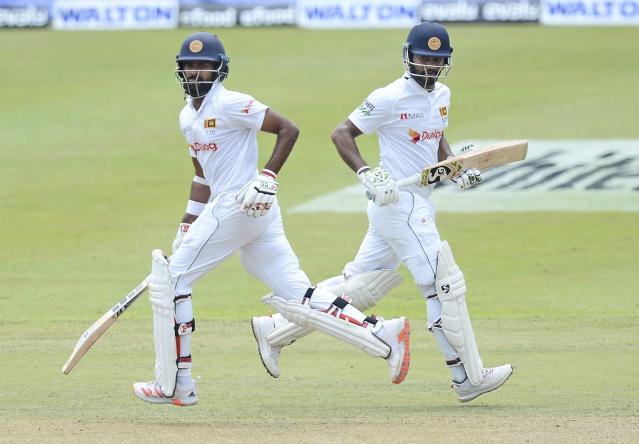 PALLEKELE: Openers Dimuth Karunaratne and Lahiru Thirimanne posted hundreds and a double century stand as Sri Lanka reached 291-1 against Bangladesh on an ominous first day of the second Test on Thursday.

Captain Karunaratne scored 118 for his 12th Test century, then Thirimanne hammered his third century and second this year. He was 131 not out at stumps in tandem with Oshada Fernando, 40 not out.

The Bangladesh bowlers had little chance against the in-form batsmen on another flat pitch, next to the block on which both sides scored more than 600 runs without being bowled out in the drawn first Test which finished on Sunday.

Karunaratne was watchful in the first hour, settling in before cutting loose once the ball got older. On 28, he was dropped at first slip and that proved to be costly.

Fresh from his career-best 244 last week, the skipper played some elegant strokes forcing the bowlers to go in defensive mode. Against the spinners, there was clever use of the feet, rotating the strike, and putting the bad balls away.

For some reason, Bangladesh held back its most experienced bowler, Taijul Islam, until after lunch. The left-arm spinner was introduced only in the 38th over but by then both batsmen were well set. Together with offspinner Mehidy Hasan, Taijul shared the bulk of the bowling. The duo sent down 41 overs.

While the captain was free-flowing, Thirimanne was more sedate. In and out of the side since he made his Test debut in Southampton 10 years ago, Thirimanne is having a brilliant 2021 after some technical adjustments to his game and cutting down some risky strokes. The discipline has paid rich dividends in the last two series and, at 131 not out, he’s on second highest score.

The batsmen had to commit a mistake to get out, rather than be bowled, and Karunaratne threw away his wicket flashing at a delivery and attempting to send it square on the offside. The ball was too close to his body and he was caught behind after facing 190 deliveries and hitting 15 boundaries.

In the last over before stumps, it looked as if Shoriful had a second as Thirimanne was given out leg before wicket. However, the decision was overturned after the batsman reviewed.

Fernando, after a disappointing first Test, was looking good unbeaten on 40. He and Thirimanne extended their partnership to 82 runs.

Its hoped the pitch may yet turn. If so, the teams have enough spin options. To back up debutant Praveen Jayawickrama, the Sri Lankans have other spin options in Ramesh Mendis and Dhananjaya de Silva.