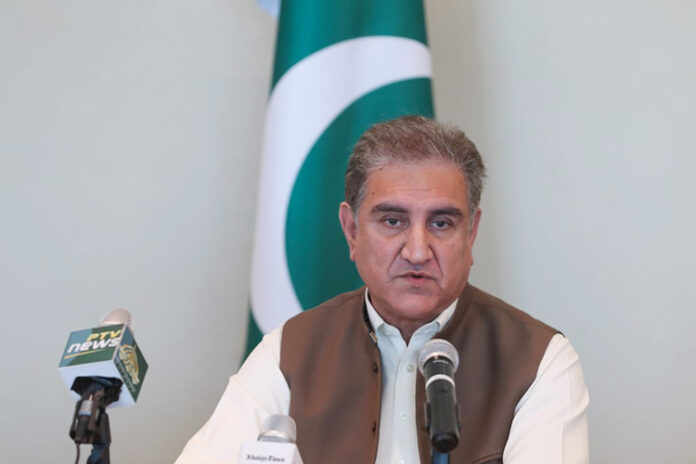 ISLAMABAD/ABU DHABI: Foreign Minister Shah Mahmood Qureshi said on Monday that Pakistan has never avoided peace talks and wanted to live in peace with all its neighbours, including India, but New Delhi would have to restore the semi-autonomous status of occupied Kashmir.

Qureshi remarks came as he spoke at a news conference in the United Arab Emirates (UAE) where he went on Saturday on a three-day official visit.

“Both India and Pakistan will have to think about their bilateral ties,” Qureshi said. “Pakistan is ready to talk with India if it takes back its steps of August 5. Pakistan cannot ignore the Kashmir issue.”

In August 2019, India stripped the held region of its special status and took direct control over it, sparking civil unrest. Islamabad has since maintained it is open to talks if New Delhi reverses its decision.

The foreign minister added that Pakistan desired peace in the region because peace would create more economic opportunities.

His statements come days after Reuters reported that top intelligence officers from both countries held secret talks in Dubai in January in a new effort to calm tensions.

Citing sources, the report had said that officials from India’s Research and Analysis Wing (RAW) and Inter-Services Intelligence (ISI) travelled to Dubai for a meeting facilitated by Abu Dhabi.

Following the January meeting, Pakistan and India announced they would stop cross-border shooting along the Line of Control (LoC) which has left dozens of civilians dead and many others maimed.

Both sides have also signalled plans to hold elections on their sides of Kashmir this year as part of efforts to bring normalcy to a region riven by decades of bloodshed.

The two have also agreed to dial down their rhetoric, the people Reuters spoke to said.

But as Qureshi welcomed mediation efforts by the UAE, he told Khaleej Times that he was not planning to meet his Indian counterpart in the country. Qureshi and Subrahmanyam Jaishankar are visiting the Gulf state at the same time.

“I am here for a bilateral visit. I am not here for an India-specific agenda,” Qureshi told the publication, which published a video excerpt of the interview.

“We welcome third party facilitation […] But no matter what friends like the UAE say, the initiative has to be indigenous,” he added.

During his visit, Qureshi also called on UAE Minister of Culture, Youth, and Social Development Sheikh Nahyan Mubarak al-Nahyan who he called a “true friend of Pakistan”.

A Foreign Office (FO) statement said that the foreign minister appreciated the role played by al-Nahyan in strengthening the people-to-people relationship between the two nations, encouraging Emirati investment in Pakistan and promoting the welfare and well-being of Pakistan nationals residing in the sheikhdom.

Qureshi also discussed the prospects of enhancing bilateral cooperation, in particular in the fields of investment, tourism and related infrastructure and strengthening the bonds of amity between the people of the two countries.

The two leaders also exchanged views on the importance of tolerance and coexistence in presenting the true image of Islam and the Muslim society.

During the conversation, the foreign minister also highlighted the positive role played by the Pakistan expatriates in the development of both countries.

Thanking the Emirates’ leadership for their considerate approach towards expatriates, Qureshi briefed al-Nahyan about the issues faced by the Pakistan nationals, in particular the visa restrictions, and sought its resolution at the earliest.

The two also exchanged views in detail on Expo 2020, scheduled to be held from October 1 to March 31, 2022. Lauding the event, Qureshi thanked Abu Dhabi for its support in setting up the Pakistan Pavilion for the event.

He also discussed ideas regarding optimal utilisation of the pavilion with a view to successfully showcasing Pakistan’s “Hidden Treasure” — the theme of Pakistan’s pavilion. Sharing his initiative of holding a major event in the Expo, the foreign minister requested the minister to grace the event — a request which was “warmly accepted”.