The newspaper must publish an unconditional apology and refrain from using such language in future: HRCP 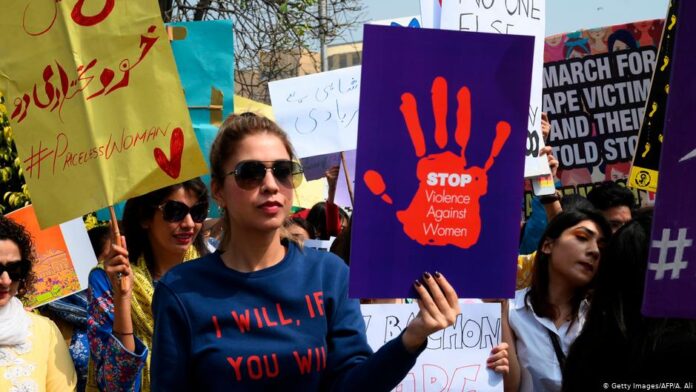 LAHORE: The Urdu daily, Ummat, has been called out by educators, journalists, and the Human Rights Commission of Pakistan (HRCP) for its use of “unethical and inappropriate language” against participants of the Aurat March.

The HRCP has demanded that the daily publish an apology after the front-page story of its April 5 issue had a headline that stated that sexual violence was committed the most against women in 14 countries.

The shoulder of the story mentioned that these 14 countries included the US, Japan, Sweden, South Africa, India, Bangladesh and other African countries.

“HRCP condemns the use of unethical and inappropriate language against women in the daily #Ummat. The newspaper must publish an unconditional apology and refrain from using such language in future,” a tweet by the commission said on Monday.

The article had purportedly attempted to highlight the fact that Pakistan was not among the top 14 countries for reported cases of sexual assault, however, its demeaning language caused major backlash from women’s rights activists, journalists and social media users.

The Aurat March Lahore retweeted a statement by the Pakistan Federal Union of Journalists (PFUJ), which condemned what it called the “uncalled for, unethical and immoral attack on women” in the newspaper.

Meanwhile, a journalist for Tribune, Sameer Mandhro, called the incident the death of journalism.

This is the main story of daily #Ummat, Urdu paper, from Karachi, about #AmarJaleel, a well known writer of Sindh. #RIPJournalism pic.twitter.com/P0iCt8UHpO

Similarly, journalist Bilal Farooqi also condemned the article and demanded an apology for the publication of these words.

#KUJ slams use of derogatory language by #Ummat newspaper on its front page for women and demands an apology, apart from action against those responsible for it… pic.twitter.com/rMXWy7BRqQ

Media watchdog Freedom Network reminded the Ummat daily that press freedom does not mean the right tp disrespect others.

@pressfreedompk demands newspaper management to unconditionally apologize for unethical #reporting#journalism does not mean to disrespect others. #Ummat pic.twitter.com/UTSP7jDVS7

Educator and researcher Meraj Hasan said the daily’s use of such language against Aurat March participants was “highly condemnable”.

“Society needs to understand how to treat women with respect even those one disagrees with. It is critical towards ending misogyny,” he tweeted.

Ummat newspaper calling Aurat March women prostitutes is highly condemnable. The paper needs to be penalized heavily. Society needs to understand how to treat women with respect even those one disagrees with. It is critical towards ending misogyny.

This is the headline of a newspaper #Ummat in Pakistan today.
Will #PEMRA Pakistan take any action? #ViolenceAgainstWomen @UN_Women @UNDP_Pakistan @amnestysasia pic.twitter.com/eKqOCVLQlx

Aurat March has become an annual feature since 2018 and every year faces backlash from certain religiopolitical groups, who have been opposing the event.

Following this year’s march on International Women’s Day, heated debates were once again seen on social media for and against the march.

Late in March, a sessions court had ordered for registration of a case against the organisers of this year’s Aurat March.

Earlier this last month, the Tehreek-e-Taliban Pakistan (TTP) had threatened the organisers of the Aurat March, accusing them of obscenity.

The TTP statement followed a flurry of images and video clips on social media that suggested participants in the March 8 protests had insulted Islam, which they strongly denied. “We want to send a message to those organisations who are actively spreading obscenity and vulgarity in our beloved Pakistan,” the statement said, addressing the marchers.

“Fix your ways, there are still many young Muslims here who know how to protect Islam,” the TTP stated.

Messages spread on social media, included allegations that the French flag was waved at the Women’s Day march, while video and audio showed participants chanting slogans.

“Each and every one of these allegations is completely false and part of a malicious campaign to silence women from speaking out about their rights,” the Aurat March organisers said in a statement.

The Women’s Democratic Front, a leftist group founded in 2018 and one of the organisers of the march, said their flag – with red, white and purple stripes – had been misrepresented as the French flag, which has blue, white and red stripes.