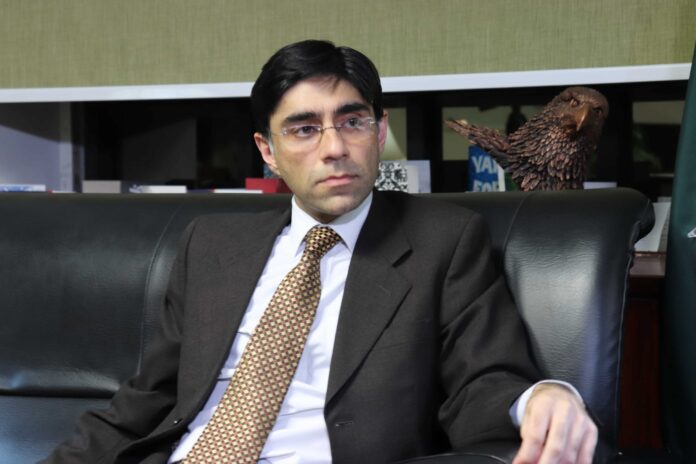 ISLAMABAD: Days after a cabinet meeting chaired by Prime Minister Imran Khan put on hold a decision made by the Economic Coordination Council (ECC) to allow imports of cotton and sugar from India, National Security Adviser Dr Moeed Yusuf has tried to justify the development in a rather bizarre way.

During an interview, the host observed Khan okayed the summary for the imports in his capacity as Commerce Minister, a position he holds in the absence of a regular minister, but rejected as prime minister.

Dr Yusuf replied: “[These are] two different things. This is the strengthening of institutions that is often discussed.”

“One […] prime minister as minister-in-charge of the ministry that looks after commerce. In this capacity, he is acting as minister of that ministry [commerce].”

“[…] But he is also the prime minister […] the head of the cabinet. So he may be the same person but he wears two different hats in this case,” he said.

The host wondered: “So he considered it okay to forward the matter to ECC as Commerce Minister but as the prime minister he wasn’t convinced.”

“No, I’m not implying this [in a literal sense]. There is a technical difference [between the two]. I’m not the bureaucrat here so I’m not exactly aware of the procedure.” Dr Yusuf responded.

The government on Wednesday lifted a nearly two-year ban on sugar and cotton imports from arch-rival India only to put it off the following day, conditioning it with New Delhi reviewing the 2019 move to revoke occupied Kashmir’s special status.

Pakistan was one of the leading buyers of Indian cotton until 2019 when Islamabad banned imports of goods from India after New Delhi revoked the special status of occupied Kashmir.