Is working from home inevitable? Will it become the norm? 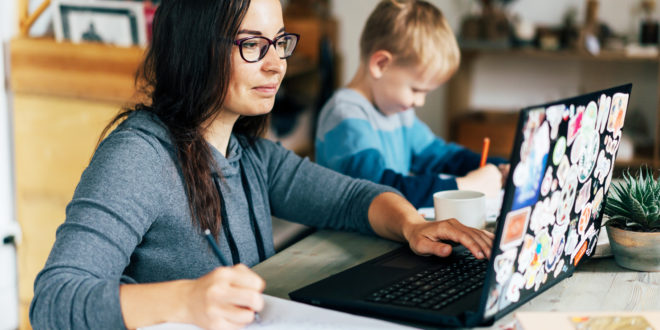 Life appears to have turned itself upside down as a result of the pandemic. In Pakistan this applies to the urban setting more than the rural. Life in the villages goes on as usual, and predictably so, since there is yet little automation there, let alone electronic change. Agriculture proceeds by hand as it must have done in Harappa and Mohenjodaro times, except for the odd tractor and cell phones. The farm worker is unable to change his work practice, nor have his life experiences taught him to accept change and innovation.

Elsewhere, society has moved indoors wherever possible, and that is probably the biggest change this pandemic era has seen as compared to previous ones: it is now possible to work from home in many sectors of life. Even in the medical field where our front line heroes expose themselves in ways that make us supremely grateful to them, radiologists for example are able to work from home to some extent, although not always.

But while that happens, the world is making a few intriguing changes which make these times an interesting study if it were not for the untold tragedy that is the death toll

In other professions there are many where a worker’s physical presence is required, but many others where it can be dispensed with. Some have taken to it like a duck to water, but the  international financial sector does not seem to be unanimous in its approval.

Goldman Sachs operated last year with less than 10 percent of its employees physically present. According to a report in the BBC, David Solomon, the man at the head of Goldman Sachs rejected remote working as a “new normal” and labelled it an “aberration.” JP Morgan and Barclays agree with him.

The Lloyds Banking Group and HSBC however appear to have accepted the inevitable and made adjustments accordingly to their future plans.

Is working from home inevitable? Will it become the norm?

There is a lot going for it, while some factors appear to be against it.

Over the years more and more people have been working from home, particularly in the IT industry which is likely to remain the torchbearer in coming years. Yet the impact on people working completely from home is very mixed.

Humans are social animals, even those who claim to be otherwise. They need a degree of diverse human contact, more than the family at home, some more than others. If working from home becomes the norm there is likely to be a much greater incidence of depression and an increase in obesity.

The impact on families is also likely to be mixed. While it can give families more time together, there is no doubt that absence makes the heart grow fonder. There has been an increase in divorce rates around the world during the pandemic. Once again according to a BBC report, a leading British law firm says it logged a 122 percent increase in enquiries concerning divorce. The strain on finances with many people losing their jobs definitely does not help.

With children at home, since the cost of childcare can perhaps no longer be met, or with schools closed at this time, working from home for parents can also be very difficult. How do you work with a demanding toddler requiring attention every minute? Such conditions might increase a couple’s ability to communicate, to work out options and solutions, but it is as likely to increase tensions. Yet there is little doubt that the ability to stay home where needed is a valuable one. It is already available in countries like England, Australia, Canada and Sweden, but the USA is known to be niggardly in this matter.

The result may be a modification in home design. Homes in future may have greater facilities for a parent requiring a quiet, separate work environment, so that while one parent looks after the children the other can work, (and hopefully the couple can work out an arrangement where they switch around!) There may also be more attention to electronic communications in houses, better wiring, more power outlets and so on, so that people can work efficiently online.

One of the most positive impacts is likely to be upon the environment. In Pakistan the two major sources of urban air pollution are cars and industries that get their fuel from all sorts of sources including burning plastic, mind boggling as that may be . While the government appears to be doing nothing about either, when schools are closed and there are fewer cars on the road, the amount of pollution does drop dramatically: fewer people rushing to and from work means fewer cars, fewer emissions, less noise, fewer accidents.

One of the major impacts around the world is likely to be on the real estate sector.

Microsoft, Facebook and Twitter all seem to be amenable to allow their staff to carry on working from home, permanently, and there will be others. What will this do to property rates? And how, if they fall, is it likely to affect economies?

. May those families who have lost loved ones find strength to bear their loss. And may the world see fit to implement changes necessary to cope with other pandemics that may arise in future, because there can be little doubt that there will be more.