Priority for Afghan government, Washington and NATO is serious reduction in violence leading to cease-fire 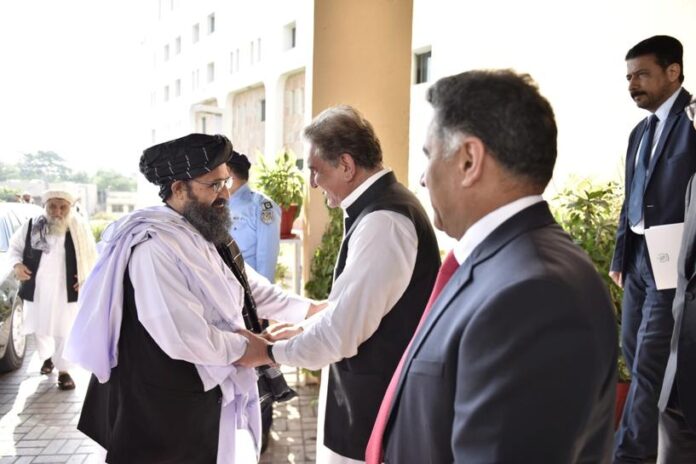 ISLAMABAD: After more than a month of delay, escalating violence and a flurry of diplomatic activity peace talks between the Taliban and Kabul have resumed in Qatar, with Pakistan seen as critical to pushing the Afganistan-based insurgent group to reduce violence and eventually, agree on an outright ceasefire.

Taliban spokesman Dr Mohammad Naeem tweeted Monday night that talks had resumed in Doha, where the insurgent movement maintains a political office. There were no details other than the atmosphere was “cordial”, a commitment that negotiations should continue and an announcement that the first item of business will be setting the agenda.

When talks ended abruptly in January, just days after beginning, both sides submitted their wish lists for agendas. The task now is for the two sides to sift through the respective wish lists, agree on items to negotiate and the order in which they will be tackled.

The priority for the Afghan government, Washington and NATO is a serious reduction in the violence leading to a cease-fire. The Taliban have said it is negotiable, but until now have resisted any immediate cease-fire.

Washington is reviewing the February 2020 peace deal the previous Trump administration signed with the Taliban that calls for the final withdrawal of international forces by May 1. The Taliban have resisted suggestions of even a brief extension, but a consensus is mounting in Washington for a delay in the withdrawal deadline.

There is even a suggestion of a smaller intelligence-based force staying behind that would focus almost exclusively on counter-terrorism and an increasingly active and deadly Islamic State affiliate, headquartered in eastern Afghanistan.

But neither Washington nor NATO has yet to announce a decision on the fate of an estimated 10,000 troops, including 2,500 American soldiers, still in Afghanistan. The Biden administration has emphasized a political solution to the protracted Afghan conflict, retained Zalmay Khalilzad, the man who negotiated the US peace deal with the Taliban and until now avoided any definitive statements about the road forward.

The resumption in talks in Doha follows on the heels of a blizzard of diplomatic activity including a steady stream of officials to Pakistan and Army Chief Gen Qamar Javed Bajwa.

Pakistan is seen as critical to getting the Taliban back to the table but also to pressing the insurgent movement — whose leadership is headquartered in Pakistan — to reduce violence in Afghanistan.

While details of the meetings have been sketchy, Afghanistan featured prominently and officials familiar with the talks said a reduction of violence and eventual cease-fire dominated discussions.

Pakistan, which also still hosts 1.5 million Afghan refugees has repeatedly said the only solution in Afghanistan is political and has previously been credited with getting the Taliban to the negotiating table.

The latest diplomatic activity in Islamabad also coincidentally comes as Pakistan is being discussed at a meeting underway this week in Paris of the Financial Action Task Force probing terrorism financing and money laundering. Pakistan is currently on a so-called grey list, the last step before a blacklisting which would seriously erode the country’s ability to borrow money.

Still, the issues ahead for the Taliban and the Afghan government are thorny ones and it isn’t immediately clear whether any country has sufficient influence with either side to force a peace deal that will last.

Afghan President Ashraf Ghani has flatly refused an interim administration, and his critics accuse him of wanting to hold on to power. Meanwhile, a Taliban official says they want a “new Islamic government” that would not include Ghani, but refused to give details of this government and whether it would even include elections. He spoke on condition of anonymity because he was not authorized to speak to the media.

In an open letter to the American people last week, the Taliban’s lead negotiator in the US-Taliban deal, Mullah Abdul Ghani Baradar urged compliance with the deal, promised rights for men and women “based on Islamic law” without stipulating, vowed not to interfere in any other nation, and also vowed to end the world’s largest crop of poppies, which produces opium used in the production of heroin.