Sherry Rehman terms the amendments as a "constitutional crisis" 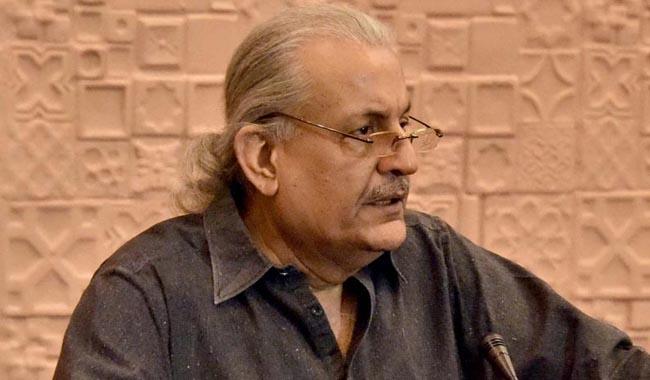 Pakistan People’s Party (PPP) leader and former Senate chairman Raza Rabbani on Sunday said that the incumbent government was trying to place pressure on the Supreme Court (SC) through its presidential ordinance.

Denouncing the move, Rabbani said that the government ought to have waited for the decision from the SC. He was addressing a press conference in Karachi alongside PPP leader Sherry Rehman.

A day earlier, President Dr Arif Alvi had issued the Election (Amendment) Ordinance, 2021, under which the upcoming Senate elections will be held through an open ballot.

The ordinance, a copy of which was shared by the president on his Twitter account, will be effective with immediate effect subject to a pending opinion by the apex court on the matter.

Rabbani said that none of the relevant stakeholders or even the Senate itself had been properly consulted on the matter and further accused the government of having failed to build a census on the matter.

He pointed out contradictions in the ordinance and wondered whether the government would conduct the Senate polls all over again if the ordinance was struck down and the Senate elections conducted according to it were declared “invalid”.

Speaking on the occasion, Sherry termed the amendments to the Elections Act, 2017, as a “constitutional crisis”, and claimed that the only reason such an ordinance had been introduced was because the ruling party feared that its members were no longer “in their hands”.

“You are playing your cards in a way that can create an emergency situation in the country,” the PPP leader said and alleged that the promulgation of the ordinance amounted to an attack on the Constitution and the parliament.

“They are ripping its (Constitution’s) page […] amendments in the Constitution is the function of the parliament and no one can deny this,” she maintained.

In this regard, Foreign Minister Shah Mahmood Qureshi, while addressing a gathering earlier on Sunday asked why the PPP and the Pakistan Muslim League-Nawaz (PML-N) were running from the Charter of Democracy which they themselves had signed.

Qureshi pointed out that the Charter of Democracy signed by the PPP and PML-N in 2006 contains a section that expressly lays out that Senate elections will be held via open balloting — the very change being sought by the government now.

To this effect, the FM accused the two opposition parties of “backtracking from the promises made to the nation”.

“Why do they want to buy people’s conscience and why don’t they allow the use of votes according to a party’s power?” he asked.

The minister said that the nation must decide for itself “who desires an end to corrupt practices and who wishes to promote Senate wheeling and dealing”. He added that the buying and selling of votes must come to end.

He further stated that whatever the SC decides will be accepted with “an open heart”.

Speaking of the opposition’s decision of a “long march”, to begin on March 26, he said that a protest is the Opposition’s democratic right, but “we request them not to spread chaos and not to take the law into their own hands”.

“They must protest in a democratic manner,” said the minister.

On Saturday, the government had decided to promulgate an ordinance to amend the Election Act, 2017, to hold the upcoming Senate elections through an open ballot.

According to sources, the federal cabinet had approved a summary to promulgate the ordinance to make an amendment to the Election Act, 2017. The approval was taken from the cabinet through a circulation summary as there was not much time for the legislation.

The sources added that Attorney General of Pakistan (AGP) Khalid Jawed Khan had drafted the ordinance which was sent to Prime Minister Imran Khan for approval.

The ECP has announced to issue the schedule for polls on February 11.

However, the enforcement of the ordinance will be subject to the outcome of a presidential reference, wherein the federal government had sought an opinion from the SC that whether the Senate elections could be held through open ballot without any constitutional amendment.

The presidential reference is being heard in the SC. A five-judge larger bench of the apex court, headed by Chief Justice of Pakistan (CJP) Gulzar Ahmed, has been hearing the case. The AGP is still arguing the matter and counter-arguments are still awaited.

There is a slim chance that the presidential reference would be decided before the time wherein the Senate elections are scheduled.