Akram says if vaccine is not available throughout a large part of the developing world, the virus will roam and return, triggering periodic shutdowns 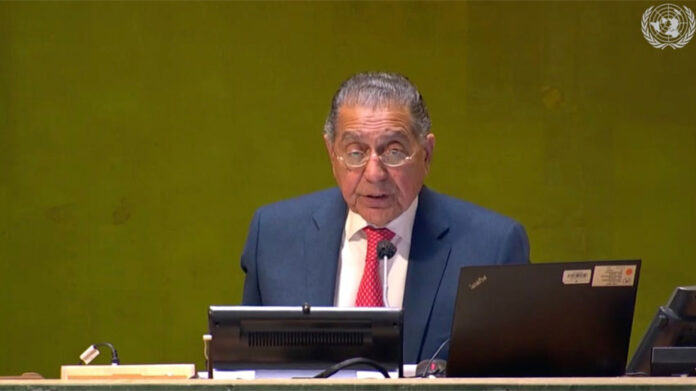 NEW YORK: Pakistan Ambassador at the United Nations Munir Akram renewed the call for ensuring equitable access and distribution of the coronavirus vaccine, saying it was “vital” to control the pandemic and for quick recovery of the global economy.

“#Covaxin may not be an instant panacea,but it’s equitable access is vital for the health crisis, & for a quick economic recovery.If vaccine is not available to the developing world, virus will roam & return, triggering periodic shutdowns”:4th Session of #IGE on FfD @PakUN_Geneva pic.twitter.com/RQaL2D2ENy

“If the vaccine is not available through[out] a large part of the developing world, the virus will roam and return, triggering periodic shutdowns,” he said while pointing out that it would further impede the economic recovery in the developing countries and slow down the global recovery.

In a virtual address to a session of the Geneva-based Intergovernmental Group of Experts on Financing for Development, Ambassador Akram stressed the need for fully supporting the COVAX Facility for vaccine distribution by funding the 20 billion shots as soon as possible.

The fourth session titled ‘Financing for Development: Towards a more coherent and consistent multilateral system: Priority policy proposals’ was organised by the Pakistan Mission to the UN in Geneva and presided over by Ambassador Khalil Hashmi.

In his remarks from New York, Ambassador Akram said that developing countries needed fiscal space and significant additional liquidity for the revival of the economy.

In this regard, he stressed the implementation of Prime Minister Imran Khan’s five-point proposal which calls for the equitable supply of Covid-19 vaccine to developing countries and suspension of debt repayments for most stressed countries until the end of the pandemic.

The ECOSOC chief said the G-20 industrialised countries’ Debt Service Suspension Initiative (DSSI) was welcome but was not enough as it should be extended to cover all distressed developing countries, including the Small Island Developing States (SIDS).

No solutions were in sight for a large part of the debt owed to the private sector, Ambassador Akram said, adding that some sort of an understanding should be reached with the credit rating agencies to enable the sector to participate.

He called for introducing new guidelines for debt resolution, including a more universal framework in the shape of an international debt authority, as has been discussed in the United Nations Trade and Development (UNCTAD).

Ambassador Akram said that the requirement for transparency should not become a precondition for help to the developing countries.

Noting that debt solution may be a slow process, he suggested the provision of larger concessional financing from multilateral development banks and the International Monetary Fund. Mobilisation of domestic resources can also contribute through national capital markets, and support for national bond issues.

“The mobilisation of the 100 billion annually in climate finance is now both a financial and a political condition for the global implementation of the Paris Agreement,” he said.

As for a new financial architecture, the ECOSOC chief proposed a fair international taxation system; digital economy; prevention of illicit financial flows, and the return of stolen assets.

The session concluded on Wednesday evening, with Ambassador Hashmi saying that he was encouraged by valuable insights and priority policy proposals. What was needed, he said in a tweet, was revitalised multilateralism, urgent and coordinated global actions to counter inter-linked health, economic and climate crises.

Later, Ambassador Akram joined the President of the UN General Assembly, Volkan Bozkir of Turkey, in a briefing to the 193-member body on their plans for the year 2021.

On January 25, PM Imran presented a five-point agenda to address the structural barriers in global prosperity, proposing equitable supply of Covid-19 vaccine to developing countries and suspension of debt repayments for most stressed countries until the end of the pandemic.

The prime minister, in his keynote address at the fourth session of virtually held United Nations Conference on Trade and Development (UNCTAD) Intergovernmental Group of Experts (IGE) on Financing for Development (FfD) in Geneva, called for a viable framework for an equitable and affordable supply of Covid vaccine to developing countries.

Prime Minister Imran Khan on Thursday said that the Pakistan Democratic Movement (PDM) had made a "mockery of democracy" and that the Election Commission...
Read more
HEADLINES