Irish airline Ryanair cuts up to 3,000 jobs over virus 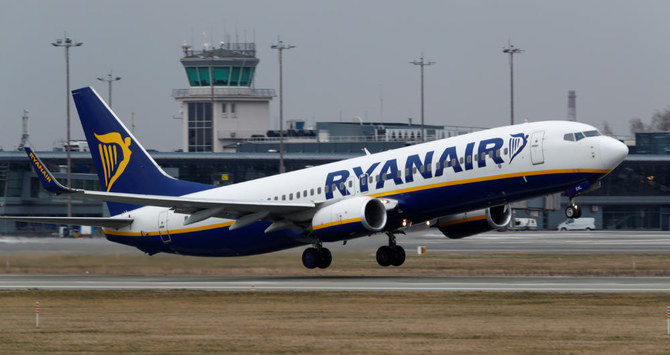 LONDON: Irish low-cost carrier Ryanair said on Friday that it planned to axe 3,000 pilot and cabin crew jobs, or 15 percent of staff, with air transport paralysed by coronavirus.

Dublin-based Ryanair added that most of its flights would remain grounded until at least July and predicted it would take until summer 2022 at the earliest before passenger demand recovers. The airline now expects to operate less than one percent of its scheduled flights in April, May and June. “The Ryanair Airlines will shortly notify their trade unions about its restructuring and job loss programme, which will commence from July 2020,” the group said in a statement.

“These plans will be subject to consultation but will affect all Ryanair Airlines, and may result in the loss of up to 3,000 mainly pilot and cabin crew jobs, unpaid leave, and pay cuts of up to 20 percent, and the closure of a number of aircraft bases across Europe until traffic recovers.” The cost-cutting measures at the airline, which employs 18,000 staff worldwide, will be implemented “as a direct result of the unprecedented COVID-19 crisis,” it added.

Chief Executive Michael O’Leary has meanwhile agreed to extend his 50-percent pay cut for the remainder of the financial year to March 2021. “Today we are announcing cuts of just over 15 percent, of which we have to lose regrettably about 3,000 mainly pilots and cabin crew over the next three to four months,” O’Leary told Bloomberg TV.

“That’s because this year we are now facing carrying less than a 100 million passengers against an original budget of 154 million passengers … The situation is grim.” “We expect to be allowed by the European governments to go back in July or from July onwards. What we are facing now is a historic decline in air traffic in Europe for the next 12-18 months.”