﻿ Confidence rises in UK economy after election, but will it last? | Pakistan Today

LONDON: Prime Minister Boris Johnson’s emphatic December election win has triggered a burst of optimism among British businesses and consumers, weakening the case for a Bank of England interest rate cut this week.

Johnson’s success in securing a large parliamentary majority, which ended a period of deadlock in Westminster, means Britain will leave the European Union on Jan. 31 and start an 11-month, no-change transition period.

Although it remains to be seen if the pickup in confidence will translate into a meaningful boost to growth, economists have been heartened by the range of indicators that have perked up over the last month.

At the end of 2019, signs of weakness in the labour market prompted two BoE rate-setters to vote for lower borrowing costs. Three others, including Governor Mark Carney, hinted recently that more economic stimulus might be needed.

But of the data published so far this year, arguably only retail sales for December were a disappointment.

Below are some of the early signals for the economy in 2020 that members of the Monetary Policy Committee will weigh up before Thursday’s announcement.

British companies are enjoying their best month in more than a year, according to the IHS Markit/CIPS UK Purchasing Managers’ Index (PMI), the strongest evidence yet of a post-election economic boost.

The PMI followed a Confederation of British Industry survey that pointed to a record jump in confidence among manufacturers. 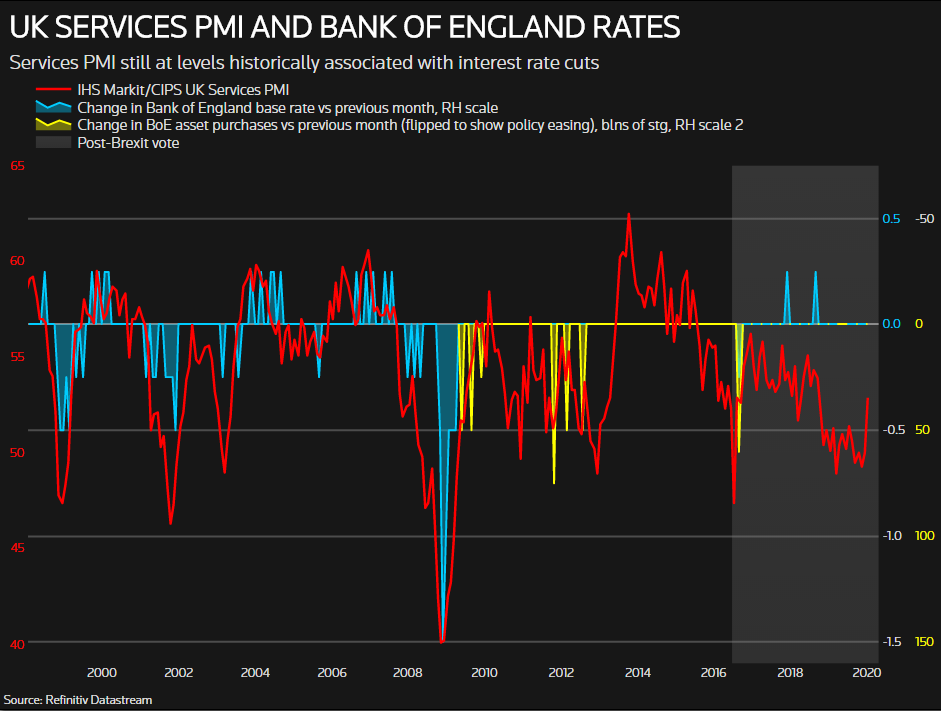 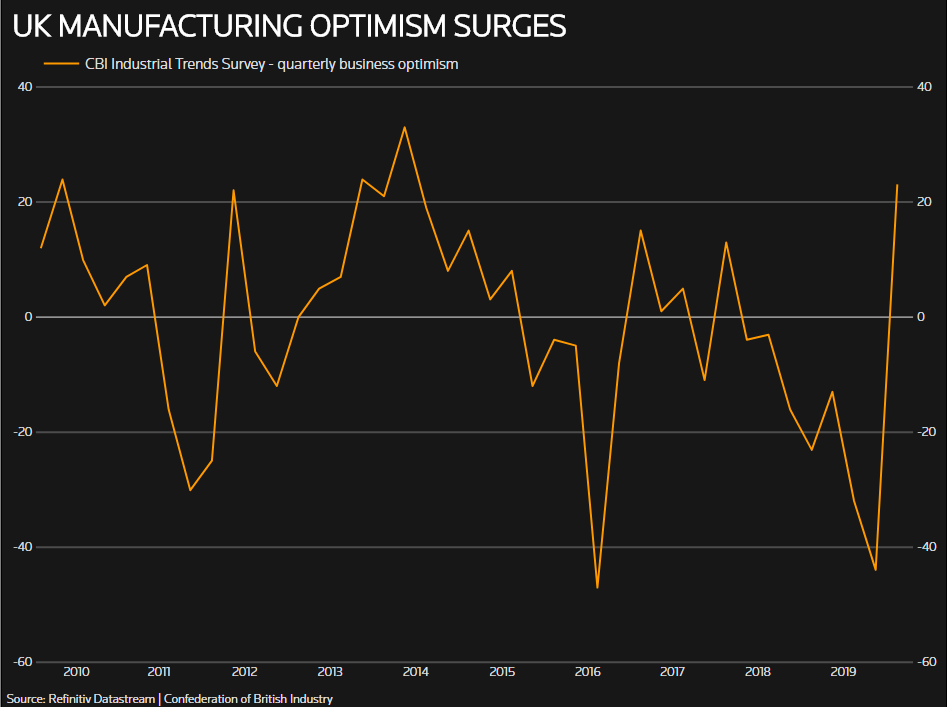 Accountants Deloitte said 53% of chief financial officers were more optimistic about their companies’ prospects than three months previously, the highest share since records started in 2008.

It survey was conducted entirely after the election. 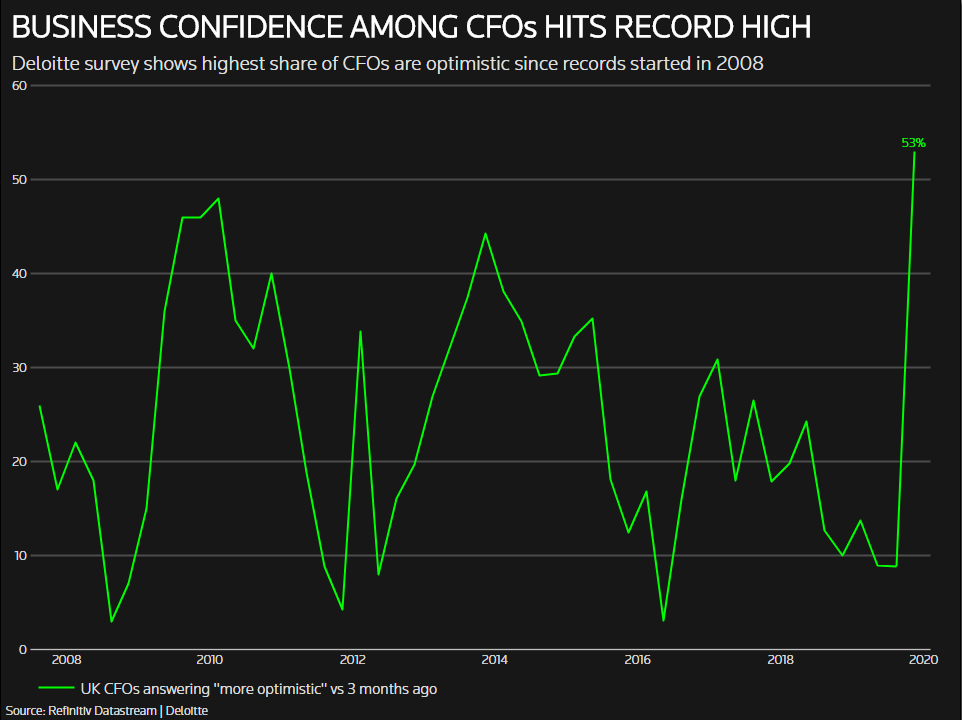 The public became much more upbeat about the prospects for Britain’s economy after the election, according to a survey commissioned by payment card company Barclaycard.

The proportion who said they were confident about the economy’s future rose 10 points to 41%, the highest since March 2017, according to the survey of 2,000 people conducted by Longitude Research from Dec. 17 to 19.

However, there are doubts as to how much consumer confidence in the economy really matters.

Britons have been among the most downbeat of all European Union consumers, according to European Commission data, but their spending has continued to power growth.

And while the Barclaycard survey showed an increase in optimism among consumers, the British Retail Consortium reported dismal Christmas trading for major store chains. 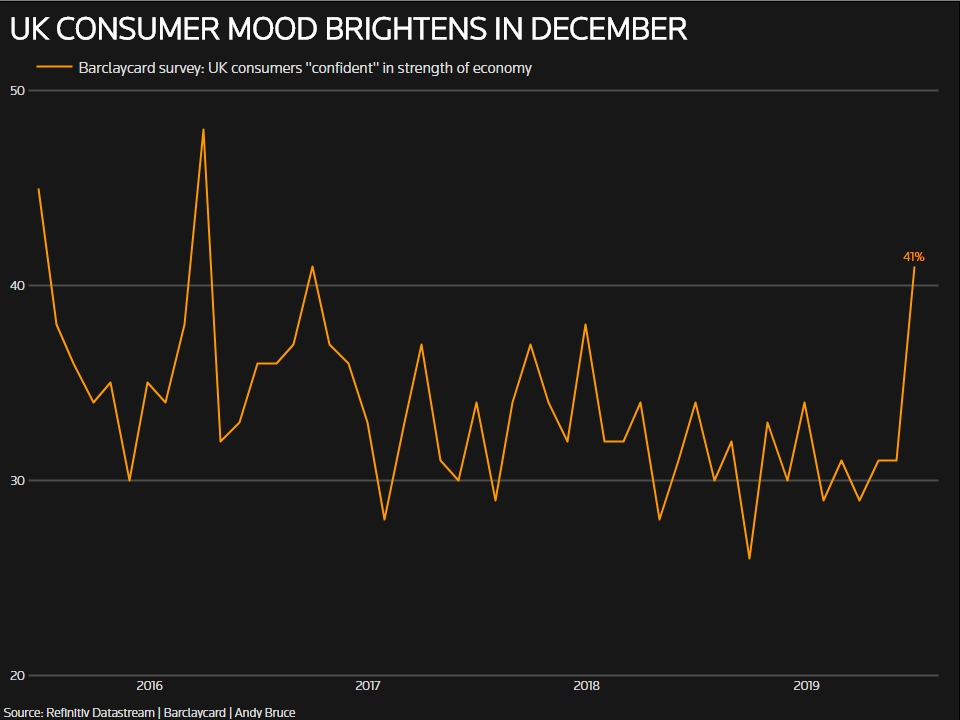 British employers increased hiring of permanent staff from job agencies last month for the first time in a year, a survey from the Recruitment and Employment Confederation (REC) showed, another sign of higher business confidence.

The survey was conducted Dec. 5 to Dec. 17, straddling the election result.

“With a new government in place and the path ahead looking more predictable, some businesses have decided that they have waited long enough,” REC chief executive Neil Carberry said. 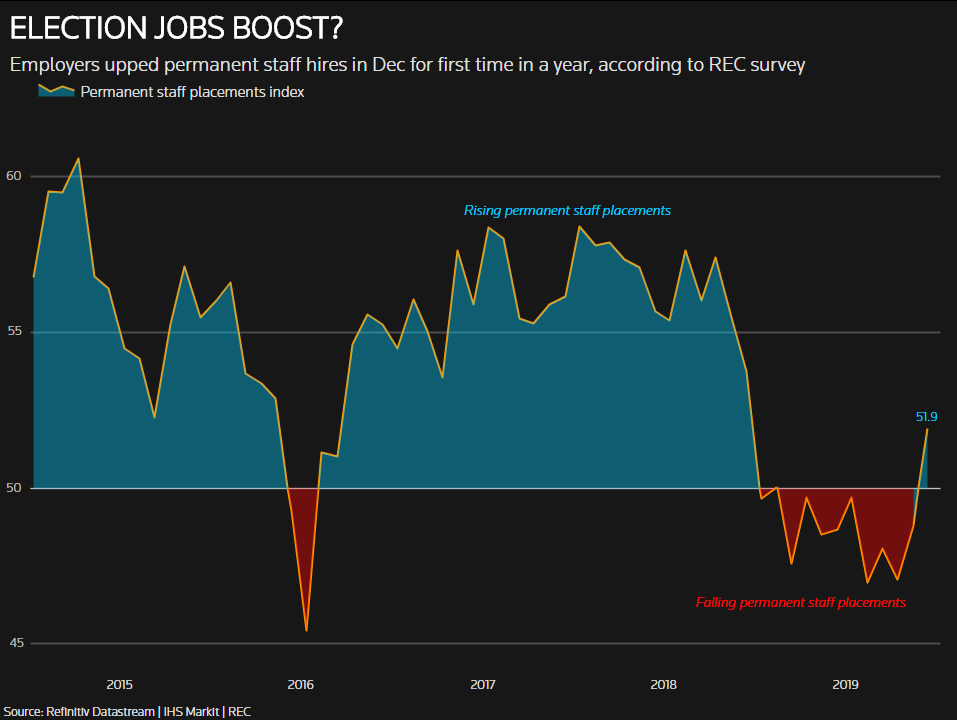 Polio winning in Sindh as another case reported in Kashmore