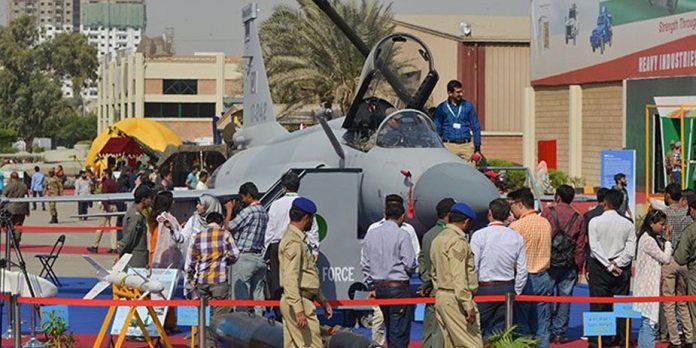 KARACHI: The tenth International Defence Exhibition and Seminar (IDEAS 2018) started on November 27 and concluded on Friday. More than 200 delegations from 51 different countries participated in the event.

The event provided an opportunity for both local and international arms manufacturers to showcase latest weapon systems that were deployed in contemporary modern warfare.

Exhibitors showcased high-tech weaponry for all three services (Army, Navy and Air Force) that covered different aspects of warfare such as intelligence, surveillance, information and data sharing. The event, organised by the Defence Export Promotion Organisation (DEPO), aimed at bringing together defence industry players from various countries of the world.

The highlight of the exhibition remained weapons produced by domestic manufacturers as they showcased some of the latest systems inducted by the Pakistani armed forces or currently undergoing trials.

Some of the top exhibits included the Heavy Industries Taxila (HIT) manufactured Viper Infantry Fighting Vehicle (IFV), a tracked IFV armed with a 30mm autocannon and Russian Kornet anti-tank guided missiles (ATGM). Another highlight on the occasion was the ‘HIT Hamza’, a mine-resistant ambush protected vehicle armed with a similar 30mm autocannon turret as the Viper.

Moreover, local defence firms had displayed three Pakistan-manufactured drones at IDEAS 18. The Burraq, Uqaab and the Shahpar were three unmanned aerial vehicles being produced in the country.

A notable exhibit at IDEAS 2018 was the Chinese SH15 155mm self-propelled howitzer. The gun, reportedly under consideration by the Pakistan Army, has a maximum range of 50km – with rocket-assisted projectiles.

Karachi Shipyard Engineering Works Ltd project director Commodore Jahanzeb Ahsan said the Karachi Shipyard would work as a regional manufacturing hub for the US-based shipbuilding company and would engage in the co-production of steel, aluminium and fibre hull boards for Pakistan Navy, fisheries and commercial sector in Karachi.

A MoU on the occasion was signed between Capital Exhibition and Badar Expo Solution for ‘Turkey Expo Pakistan’ and ‘5th High Tech Port’, which will be held in November 2019 in Islamabad. The contract will be signed within 30 days of the MoU.

Meanwhile, UAS-global and Institute of Space Science and Technology (ISPA) Karachi inked an accord to promote understanding on matters pertaining to space research and innovations as well as to outline the terms and conditions related to the project between the two parties.

Another MoU was signed between Pakistan’s Supreme Tecnocrafts Aviation services and Turkish Ostim Defence an Aviation Cluster (OSSA). Under the agreement, the Pakistani company will market OSSA’s defence products in the country.

An IDEAS Gala Dinner, with specially articulated performances by the world’s best international artists, musicians, dancers, technicians of laser and fireworks from Austria, Czech Republic, Slovenia, Bulgaria, Mexico, Sweden, UK, and Australia, was held on the second day of the event. The event, titled ‘United We Stand, Together We Hold Up The Sky’ was a one-of-its-kind in Pakistan with modern aesthetics and a number of foreign dignitaries in attendance.

The distinguished foreign guests on the occasion were observed appreciating the beautiful collections of designers, dances of the country’s local cultural artists and live performances by legendary artists including Hadeeqa Kiyani, Saeen Zahoor and a Qawwali by Hamza Akram.

Meanwhile, Pakistan’s armed forces presented an air show and anti-terrorism demonstration at the Sea View on the third day of the exhibition. The JF-17 Thunder and F-16 fighter aircraft of the Pakistan Air Force (PAF) enthralled the audience at Nishan-e-Pakistan. Sherdil aerobatics team also presented a scintillating aerial display.

Addressing the audience following the air show, the CM said, “Today our belief has been reaffirmed that our armed forces are ready to face and thwart any threats posed to our nation,” he said, congratulating those who participated at the event. He also applauded all stakeholders, including Pakistan Navy, for the successful conduct of IDEAS 2018.

“Visiting participants in the exhibition from friendly countries and their presence in the arena is a matter of profound privilege and great honour for all of us,” he said, adding that it provided a platform for the display of defence weapons and machinery. He commended Pakistan’s relationship with China touching new heights and said that the China-Pakistan Economic Corridor (CPEC) will enhance trade activities in the region.

CM Shah also touched upon the importance of the Gwadar port, saying that the enhanced responsibilities of the Pakistan Navy were an invariable reality. “I have a firm belief, that Pakistan Armed Forces will fulfill their responsibilities with utmost dedication.”

Shah said that the government and defence forces are working hand in hand to defend the ideological and physical boundaries of the motherland as are the youngsters. “I want to tell you that Pakistan is a country full of natural resources and equipped with skilled and motivated youth working for the cause of this country,” he added.