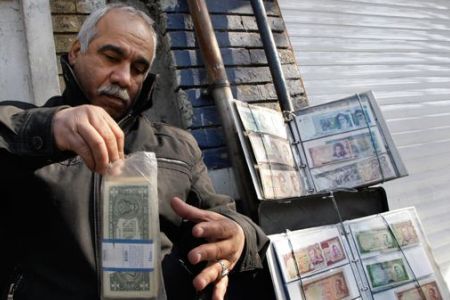 DUBAI: Iran is banning imports of over 1,300 products, preparing its economy to resist threatened US sanctions, amid rare public protests against the plunge of its currency to record lows.

Police patrolled Tehran’s Grand Bazaar on Monday as security forces struggled to restore normality after clashes with protesters angered by the rial’s collapse, which is disrupting business by driving up the cost of imports, witnesses said.

Traders from the bazaar, whose merchants supported Iran’s 1979 Islamic revolution, told Reuters by telephone that most shops remained closed.

“Police have dispersed the protectors. We are all angry with the economic situation. We cannot continue our businesses like this. But we are not against the regime,” said a merchant in the bazaar, who asked not to be identified.

Industries and trade minister Mohammad Shariatmadari slapped the import ban on 1,339 goods that could instead be produced within the country, Iran’s Financial Tribune newspaper reported on Monday, quoting an official document.

The order suggests the US sanctions threat is pushing Tehran back toward running a “resistance economy” designed to conserve foreign exchange reserves and become as self-sufficient as possible in many products.

The trial is under heavy pressure from the US sanctions threat. It sank as low as 90,000 against the dollar in the unofficial market on Monday from 87,000 on Sunday and around 75,500 last Thursday, according to foreign exchange website Bonbast.com. At the end of last year, it stood at 42,890.

After US President Donald Trump decided to withdraw from world powers’ deal with Iran on its nuclear program, some US sanctions are to be reimposed in August and some in November.

This may cut Iran’s hard currency earnings from oil exports, and the prospect is triggering a panicked flight of Iranians’ savings from the rial into dollars.

Hundreds of merchants gathered in front of parliament in Tehran on Monday to protest at the rial’s fall, witnesses said.

In the Grand Bazaar, hundreds staged a similar protest, videos posted on social media showed. A larger, sustained series of protests could put pressure on President Hassan Rouhani, who has already been harshly criticized by hardliners for his economic record.

Ali Fazeli, the head of Iran’s Chamber of Guilds, a business association, told the semi-official Tasnim news agency later on Monday: “Business is as usual in the Grand Bazaar.”

State TV quoted Tehran’s deputy governor Abdolazim Rezaie as saying “no one has been arrested in the Tehran protests”, adding that all the shops will be open on Tuesday.