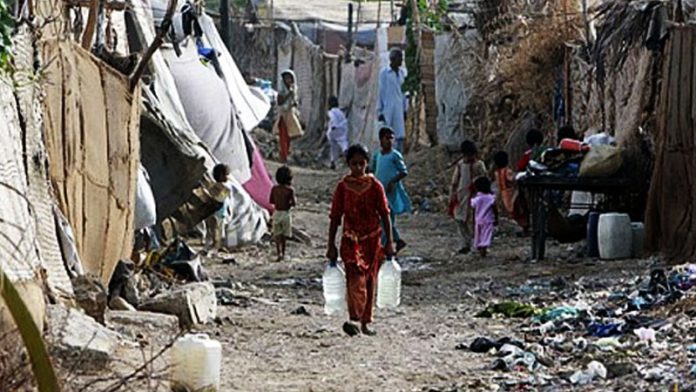 According to the Economic Survey, Pakistan’s poverty headcount has registered a prominent decline in the last decade or so at both the regional and national levels.

Some of the major reasons which contributed to this fall in poverty headcount since 2005-06 were poverty alleviation reduction programmes like “Benazir Income Support Programme (BISP), improved political situation, peace and tranquility, strong recovery from low GDP growth rate of 1.7% in 2008-09 to 4.5% in 2015-16, continued higher inflows of remittances especially from Middle East which are destined to relatively poor families and above all a more inclusive characteristics of economic growth,” said the report.

According to the Economic Survey 2018, Pakistan has posted a remarkable fall in poverty incidence since the year 2007-08.

Normal intersurvey decline was recorded at approximately 7 percentage point with the only exception being the year 2010-11.

Intersurvey fall in poverty headcount was inconsequential in 2011-12 against the 2010-11 survey, reported the Economic Survey 2018.

Two reasons were cited for this performance which was mainly that inter-survey period may not have been period sufficient to note a meaningful fall in poverty at regional and national levels.

The second was the disastrous floods in 2010-11 which dealt a blow to the rural population whose income and livelihood ended up being impacted significantly by these floods.

But the Economic Survey 2018 highlighted “Overall, despite floods of 2010 and chronic energy shortages, aggravated security situation and government’s limited capacity to mobilize and channelize its own resources exclusively for social welfare and poverty eradication programmes, the declining trend in Poverty headcount in Pakistan is both promising and encouraging.”

“Strong resurgence of economic growth, more provincial autonomy to shape and spearhead their own social welfare and poverty eradication programmes and targeted social safety nets programme of BISP have all been the main drivers of poverty decline in the past.”