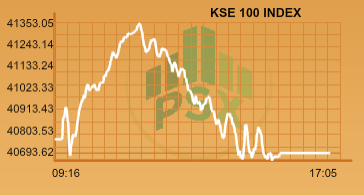 LAHORE: PSX kicked off the day with a stellar performance but started to lose gains intraday before closing in the red territory again. The market opened the day with assurances on several economic matters from the Finance Minister Ishaq Dar. The minister in a press conference ruled out any possibility or plan of the government to obtain any support from the International Monetary Fund (IMF).

Capital Stake research director told Profit that “As the earnings season kicks off, investors maintain a cautionary stance and are waiting for companies to announce their performance before the investors can decide their position in them.”

He mentioned that the inflation which stood at 4.2 per cent at end of the fiscal year and was under control. The interest rates lowest in decades and the government on track to meet its next economic growth target. He also stated that foreign reserves of the country stood at $14 billion and there was no reason to worry.

The market volumes were thin but better than the previous session. Total market volumes added were 33 per cent higher day to day basis at 166.84 million. Aisha Steel Mills Limited (ASL +5.83 per cent) hit the upper circuit breaker and top of the volume chart with 15.18 million shares exchanged. TRG Pakistan Limited (TRG -2.02 per cent) was next with 11.04 million shares traded and Dost Steels Limited (DSL +4.35 per cent), volume 9.52 million, succeeded.

International Steels Limited (ISL -3.39 per cent) declared sales a 20 per cent QoQ and 63 per cent YoY rise in sales which converted into per share earnings of Rs 2.31 in the first quarter of 2018.

Both big names in the automobile industry, Pakistan Suzuki Motors Company Limited (PSMC +5.00 per cent) and Honda Atlas Cars (Pakistan) Limited (HCAR +5.00 per cent) jumped to the day’s maximum price after news of an increase in duty on imported cars across all car segments floated the market.

Pakistan Oilfields Limited (POL +3.49 per cent) notified the exchange about developments after the Jhandial discovery’s hydrocarbon flows. According to a notice sent to the exchange, the company will be booking will be a one-off gain of Rs 2.90 billion for incremental revenues related to retrospective pricing impact of conversion of Mamikhel, Maramzai and Makori East to 2012 Petroleum Policy.

Capital Stake research director added, that in the coming session investors are likely to keep a close eye on earning declaration from prominent names like DGKC, SHEL, EPCL and FEROZ. This is likely to fuel market volumes as scrips are expected to be traded. Although the market has not completely recovered the losses during the last few weeks, in view of the earnings season, the market is likely to see some potential gains.