WikiLeaks, the organisation that’s famous for leaking and exposing secret information and classified documents from anonymous sources, recently announced that the CIA has a large supply of spy tools that be used to hack into computers and mobile devices and even some televisions.

Such amounts of snooping could literally cause your electronics devices to turn into recorders of your everyday conversation and routine.

The CIA has gone as far trying to hack into small scale routers such as those installed by PTCL. Don’t believe us? Check out the image down below for yourself! 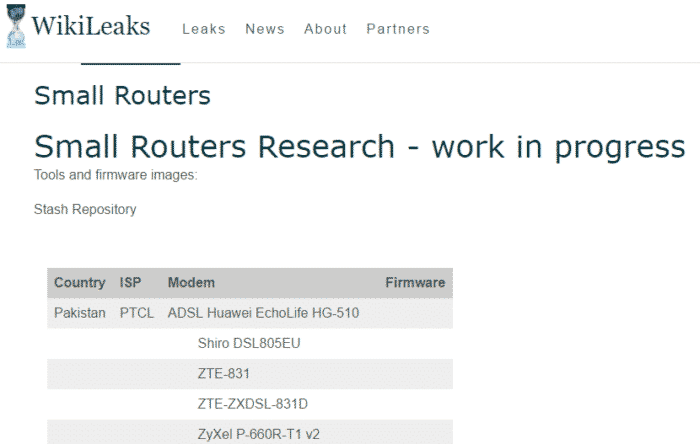 You may be asking yourself this question over and over again after hearing the news. It is apparent that the CIA hacking knows no bounds. For those of you who are still not sure whether or not you are vulnerable to getting hacked, read through some of the indicators below to make up your mind.

1. You are reading this article

The very fact that you are reading this article means that you are connected to the internet and are in fact using some kind of device, be it a mobile phone, tablet or a PC.

2. You use a mobile device

Using a mobile device will automatically and instantly make you vulnerable to getting hacked and having your private and confidential data shared online.

When you are buying a laptop or you already using one, make sure to check the specifications sheet for a feature called “Wi-Fi”. Wi-Fi is basically a wireless internet access for your laptop and mobile phones. In case your laptop comes with this one of a kind feature, that means you are vulnerable. In order to counter this issue, we would recommend you to use an Ethernet cable because of which you will not need to use Wi-Fi.

Of course, not all areas are affected by the CIA hacking. However, just to make sure, you can check the following image of the Earth and see whether you live inside the affected area or not.

6. Everyone is NOT affected!

With the news about the CIA hacking going around the above indicators present, everyone might think that they are vulnerable to getting hacked. However, that is not the case. Not everyone is affected by it. If you are born anytime in 2018 or later, you are definitely NOT affected!

Case filed against KE’s CEO after youth dies of electrocution